I have been using Fontlab for millennia now, but when my Macbook told me that my OS was prehistoric, I needed to upgrade FL5 to 7, or upgrade Glyphs. I actually upgraded both, as I am familiar with FL , but I want to like Glyphs.

My usual modus operandi is : I draw a font by hand, photograph it, trace it, or vectorise it using a very old (but very useful) program called ScanFont and create a font.

Ever since I have upgraded my OS, I cannot use the standalone Adobe software that I have, because Adobe now works with really expensive monthly subscriptions (which I refuse to pay for). ScanFont is also waaaaaay too old, so that doesn’t work either.

Leaves me with Affinity Designer, which is great for the graphics, but doesn’t come with a live trace function.

I noticed that FL7 has a live trace option: you can drag and drop your artwork inside a glyph box, go to element/image/autotrace and it will convert the image to a usable vector. It even lets you name your artwork, say A, B, C, etc, then lets you drop the whole lot onto a new file and the A will go to the A box, the B to the B, etc.

So… long story short: is it possible to add this function to glyphs???
You can import artwork in Glyphs by going into a glyph box, then glyph/add image, but there is no trace function whatsoever. The only thing you can do is to trace the glyph yourself. Unless, of course, I am overlooking something.

The reason the trace option is so good, is because for a lot of my fonts, I use brushes and ink. They tend to have some splatter as well…

You can try the “Trace” plugin from the Plugin Manager. You drag the image into the glyph, position it and then run the filter.

Hey Georg, I installed the Trace plugin: it crashed Glyphs and now I need to reinstall the app.

I believe the Trace plug-in needs an update.

What kind of fonts are you drawing and tracing? Handwriting typefaces?

Most software is aimed at people who make text fonts, or neat fonts. The lines of these fonts are nice and orderly. Mine, however are the opposite. The trace function is nice, because if I make a very rough font, then hand tracing it is a nightmare.

In the meantime, you can try Inkscape (open source) or Vector Magic (online tool) to trace images into vectors.

What version of Glyphs, MacOS and processor do you have?

I tried it on a few versions and it works except in M1 macs. I need to have a look at it again, last time I couldn’t get it to build properly.

Hey Georg, I have 2: a Macbook pro with El Capitan on it and a new iMac with the latest OS and the Apple chip. The Macbook is what I have been using so far - I am still getting used to the idea that I need to work on the iMac…

@LucasFonts : I may sound conceited, but InkScape’s interface feels like

I have updated the Trace plugin a bit. Should work better now. If it still crashes, please send a crash report (the one that comes up when you restart the app) and write a small note here.

Thanks a lot!
The gauge tool plugin now crashes Glyphs… just so you know…

Did you send a report?

ahh, no, Glyphs just told me this: a plugin caused a crash last time (gauge tool) remove or not. Not exactly those words, but I removed the plugin, before it caused a crash. 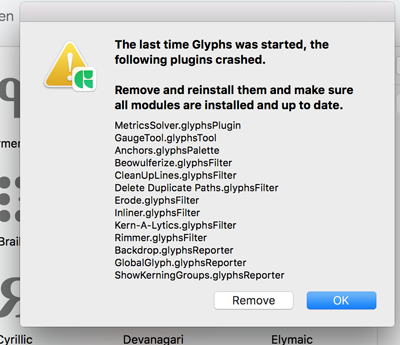 Is it the “Trace Image” plugin, or the “Trace” Plugin?

(I don’t know where I got “Trace” from, it was jsut in the Filter Menu, but it doesn’t do anything and has only one Text Field with a value)

I installed the “Trace Image” from the Plugin Manager, but that one seems a little buggy. For example the “Autotrace” tab: The traced preview is shifted downwards by around 100 units (or mabe to have the path bounds at y=0 ?) and changing any of the number values has no impact. The “Potrace” tab works better, but “Size of smallest element” and “Optimization Tolerance” do have no effect.