Can you losslessly convert from cubic to quadratic Bézier curves? I read this old TypeKit blog post stating the following:

It seems to state that it should be possible, but I have had mixed results when either exporting quadratic curves directly to .otf or choosing Path > Other > Convert to Cubic.

Can you losslessly convert from cubic to quadratic Bézier curves?

Not sure why you have problems with the said conversion though. Maybe some rounding goes into play?

Quadratic curves normally need more segments to describe the same shape that can be described by one cubic segment. So converting cubic to quadratic adds more points. Converting back to cubic can be done simply by converting each quadratic segment into into cubic. Normally the converter likes to try to reconstruct the original cubic segment. That can lead to small error.
And both direction will introduce rounding errors.

I seem to have been mistaken. The convert to cubic option works flawlessly, but the direct export still causes issues. Have a look at this screenshot. 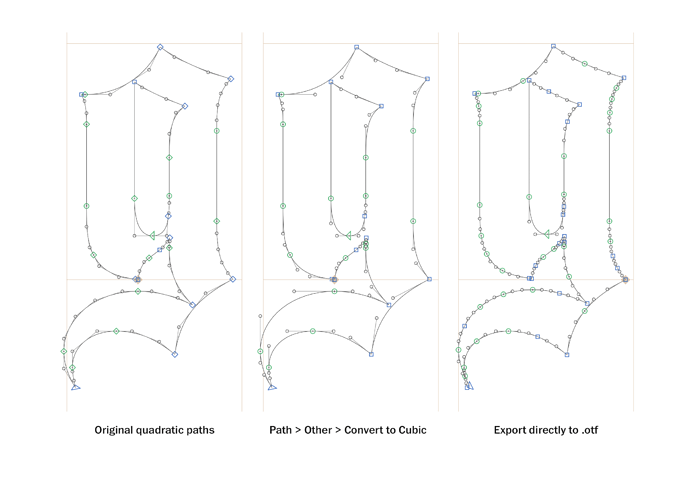 The Export to OTF doesn’t do the path optimisation I was explaining above as it might change the outlines.

Oh, my apologies. Thanks for the explanation.

How to "link" handles to one another?