Can yo show a screenshot?

The gray background only appears after the window is enlarged. 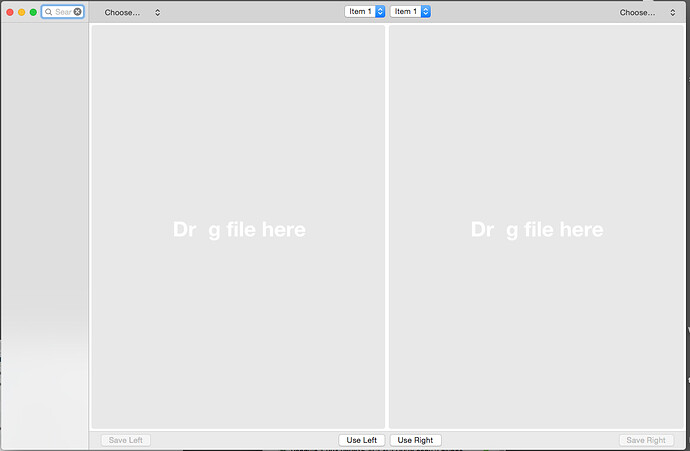 Hmmmm… I cannot reproduce this.

One other difference I noted is that under 10.10.5 when the app is first opened, the background is white until the window is enlarged even slightly. Once the gray background appears, it is persistent even when the window is made very small.

In the other two sys versions, the gray background with the words appears immediately upon opening.

A suggestion to improve MergeGlyphs and make it easier with compatibility;
To keep the left side column similar to Glyphsapp:

It probably will make scrolling more practical; also by enabling same classifications for specific selections such as: Languages; Numbers, Punctuations … + brake down of each when needed.

Not related with the thread but with Merge Glyphs, a suggestion…
It would be handy that the user can skip some comparison items for instance glyph label color.
I’m trying to merge two files and one has a lot of glyphs colored and its not important and this clutters the Glyph differences list.

An option to ignore some entries is a good idea. And the separation in categories is on the list already.

Sorry to bump this but i didn’t think it warranted a new thread.

I may have missed some info somewhere, but are there any plans to include some form of scripting integration in MergeGlyphs? I’ve been using the app a lot recently, and having the ability to say, for example, ‘for glyph in font[0]: if glyph.colorIndex == 4’ then use left. This may also allow for reporting in the log things that may be accidental (anchor positions shifting by one unit), upon which such changes could be reviewed, batch processed, and then the GUI used for other things. (Of course, being able to run without the GUI would also be helpful, if not potentially dangerous) .

I also agree with the choice of ignoring or (oppositely) focussing on specific parameters for changes [the latter may alleviate the need for scripting if its customisable enough].

I just wanted to merge two fonts, that have the same glyphs and same glyph names. however, in one of the fonts some glyphs where categorised differently (once as »Letter« and once as »Other« (or so, don’t remember exactly)).

In Merge Glyphs the interface did say for these glyphs, that they are not existing in one of the 2 files. This made me assume that Merge Glyphs doesn’t compare glyphs by their name but by the index in the font or something similar? Anyway, this might be considered as an issue, because the glyphs are in both files and the only difference was the Category.

Can you send me the two file?

And Yes, I did thing about adding scripting…

MergeGlyphs is a very helpfull application, but it seems to need an update. After merging some glyphs the cpu-usage gets over 100% and then it does nothing for minutes. Neither save changes nor go to the next glyph is possible, although in »sofort beenden« (»quit immediatly«?) it still seems to respond.