I’m comparing nametables of otf’s exported from Glyphs in OTMaster and I’m wondering why some weights get a name ID 17 entry and others don’t. In this example the Bold and Bold Italic entry 17 is missing.

Name ID 17 is not always necessary. See the Naming tutorial.

The tutorial says that:

you only need to set these parameters if they differ from the Family Name and Style Name entries. Otherwise they are not necessary. In other words, only use the Preferred Names to override the defaults established by Family and Style Name. Needless to say, it makes no sense to override them with the same values.

In my case the entries 16 and 17 don’t differ from the Family Name and Style Name entries, so why is Glyphs creating those entries?

Do you know which name entries the latest version of Office for Mac uses?

Do you know which name entries the latest version of Office for Mac uses?

I think there is a verb missing in this sentence , and I can’t quite guess which one.

Update: you mean which ones are used by Mac office?

Euh… That’s exactly what my question was…

To elaborate on my question:

I’m having a problem with the SemiBold and ExtraBlack weight of this family in Word for Mac. The roman and italics of this weight get replaced by a fallback font. However, in the font menu it previews correctly. 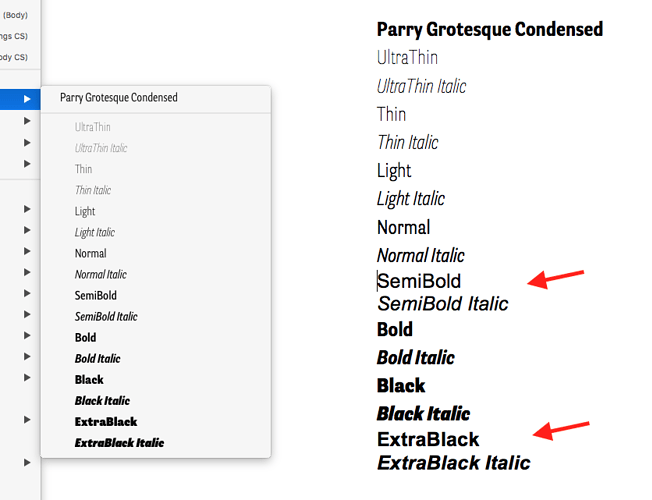 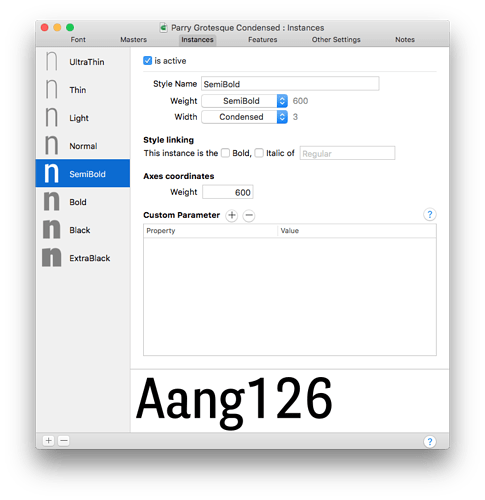 I figured it out. For the name entry 1 Microsoft, Glyphs automatically makes SmBd from SemiBold and ExBlack from ExtraBlack. Apparently the latest version of Word for Mac does not understand this. After I edited the names back to SemiBold and ExtraBlack in OTMaster the problem was solved.

The question now is, will this work on Word for Windows…?

Edit: I suspect Glyphs makes SmBd for SemiBold because the entry became too long: “Parry Grotesque Condensed SemiBold”. @mekkablue Would that be the reason?

Not a question this time, but wanted to share a trick.

If you find yourself, like me, using a lot of Name Table Entry custom parameters and having to change them for every instance. It can be quit time consuming to edit each parameter one by one.
What I do is copy the parameters, paste them in an text editor document, do a search and replace (e.g. replace Thin with Light), and copy paste the parameters back to Glyphs.