I recently coded a script/plugin, something between Word-O-Mat plugin and the Sample Strings Glyphs feature.

This idea came from the fact that Word-O-Mat work only with letters, and something I wanted to find a context to test a glyph that is not a letter.

A solution was to store Sample String in the Preference > Sample String, and after that access them with Edit > Select Sample Text...

But this solution is not the smartest, and still required too much user action in my opinion.
So that why I coded a Context Text plugin. 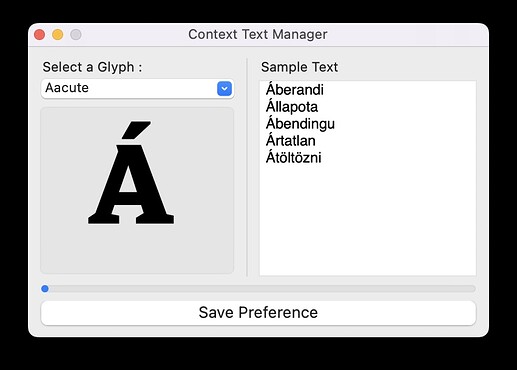 This plugin work in two parts :

Here is a demo.

I was wondering it this feature could be added like an additional feature of Sample String Glyphs feature.

I was going to ask, will you make the plug-in public libre software on GitHub?

Then I found GitHub - HugoJourdan/Context-Manager: Create and manage your own contextual words/strings library. [Glyph3 Plugin] where you posted a binary, and a note about an upcoming retail license - so that answers my question