Hi!
I have this strange thing that’s probably easily fixed. I have a .ttf-file which has small caps in it but Adobe apps (for instance) can’t find them the usual way. Opened it in Glyphs to investigate and saw that they weren’t defined in the “Features” tab. So I clicked “Generate automatically” and updated. Features were added and all was fine and dandy.

However, when exporting the font from Glyphs some characters, like the “O” got strange. I thought it was a “reverse contours” thing but that isn’t the case. It looks like one of the paths doesn’t have any “nodes” (if that’s what they are called) in them. I can’t edit the path by adding nodes, slice it with the knife or even convert the path to cubic e t c. What’s happened with it and is there a easy fix?

See attachment for example, it’s the outer path that is strange. Same thing on the “i” where the dot disappears in export due to the path. 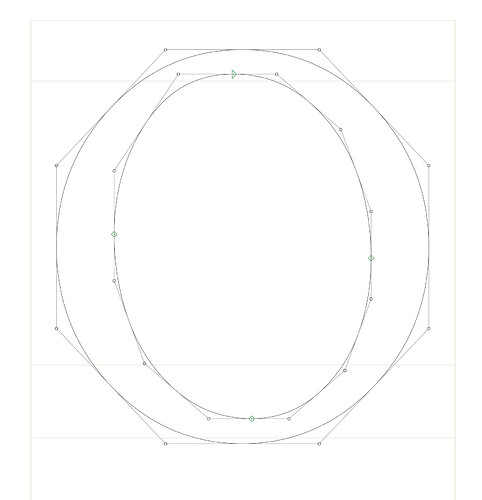 TrueType curves without oncurve nodes are totally fine. It seems that Glyphs has still some problems with it. Could you send me the original .ttf file that I can have a look?

Just curious, did you have the time to take a look at this Georg?

The only solution I’ve had to this is to create a new path, that solves the export problem, but I would like to not have to do that on the affected letters.

Nice! Keep up the great work!