Not all glyphs show up in Source Han Sans

For some reason, some Chinese glyphs do not show up when I open Source Han Sans (https://github.com/adobe-fonts/source-han-sans). 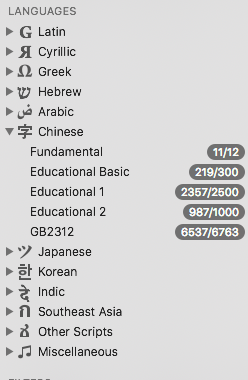 Which one exactly did you try?

Both the Simplified Chinese and Japanese Language-specific OTFs and the OTC had the same issue.

If you’re trying to match using the sidebar, then try the following:

More info is in the Import Existing Fonts and Getting Your Glyph Names Right tutorials.

Note that I have not looked at the Source Han Sans fonts. These are general notes for when importing an OTF. Hope that helps.

If there might be a different issue here, providing detail in what you did, see, and what you expected to see can help determine the issue.

I just tried following those steps and it didn’t solve the issue (certain Chinese character glyphs missing). For example, a basic character 八 (uni516B) does not show up, even under ‘All.’

For example, under Educational 1 only 37/80 characters are shown here, but there should be 80/80 with no missing glyphs.

I had a look at this and it works much better now.

Did you update the app? I tried re-downloading and the issue is still there.

No, will upload a new version in the next few days.