Not found? what does this mean when importing shapes

The glyph "a chinese word " ws Not found
The font name is correct after import, the unicode is also correct, anything wrong? 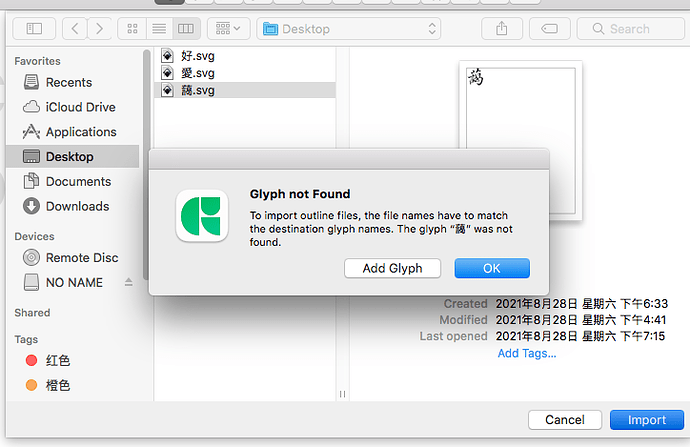 When you try to drag an image into the font view, but not on a glyph cell, it tries to find glyphs with the name of the image files and lets you add them if they are not present, yet.

please take a look at this pic, if I rename a svg as “a.svg” it will be imported to the position of letter “a”. But, if I don’t rename it and import it, it will be imported as a second glyph, so that there will be two words. For one unicode, there should be only one word to match it. On the picture blow there are two words for uni661B.
svg files uploaded for your test. the Chinese word is 愛 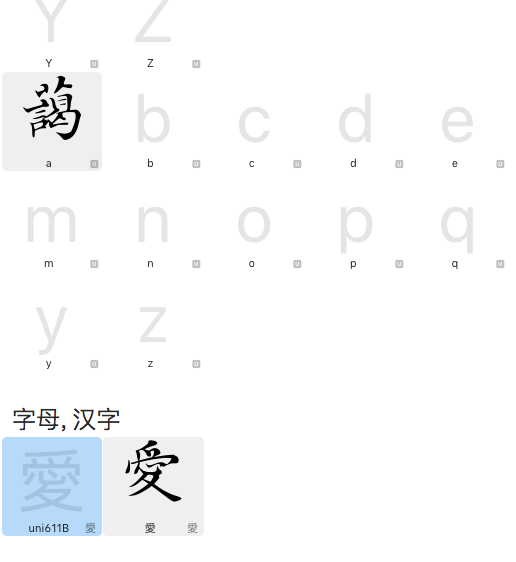 when exporting it will say “illegal character”

Svg file with a English name works fine, but for Chinese, it’s not working.

You need to use ‘uni611B.svg’ as name for the file. I’m working on the import to improve all this.

Thanks for your hard work.
For now, you are right, While, in the cell, apparently its unicode is recognized.
It works for english, it should also work for other languages.

any progress? Or the problem will be solved in the next release?

That will be in the next release.

when will the next cutting edge version come?

I’m almost there. I like to fix one more bug.

i downloaded the new version, importing Chinese words is still not resolved. I still have to rename it to unicode before importing. That would be boring job.

You are right. I was working in a branch of the code for the next little bigger update and forgot to back-port this to the current code. Will be in the next update.

when will the next release come, i’ve been waiting for this for a long time. thanks.