Hi, I purchased Glyphs a while ago (full version directly from the Glyphs website), but twice over the past few months I get the following message when I try to open it after quitting. (I was using 2.5b Build 1082.) And then I’m unable to open it or update anything. Thanks.

This means that the beta you installed is outdated.
Download the latest beta here:
http://updates.glyphsapp.com/Glyphs2.5b-1097.zip

Thanks, will do. Since this is another Beta, will I run into this issue again in another 30 days? Is there a way to avoid it so I don’t have to keep requesting and installing updated versions each month?

Yes, there is. Activate both options in Glyphs > Preferences > Updates, I suspect you are missing the first one: 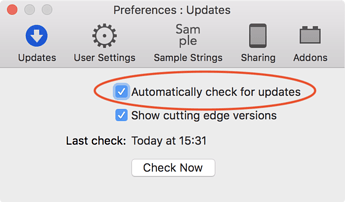 Indeed, I was missing the check on the first one. It is now checked. Thank you for your prompt replies and help mekkablue.

…another 30 days have elapsed and I’ve run into the exact same problem as described above. I had both of those “updates” boxes checked, but I chose not to update to new versions during this time because the version I was using was stable and working fine.

Now I’m locked out of using the app again and don’t have a way to download the newest version. To be honest, this has become frustrating (not blaming anyone, just that I have to keep redoing this process and delay work) as it’s happened more than once.

It may be me overlooking something, but how can I resolve this?

thanks… do i need to reenter all my billing info? i only know to go to the Store link with fastspring.com but it wants all my info again.

Also, when i download this current version, how can i prevent this from happening in the future? I plan to update from time to time, but i try to stick with a stable version for more than 30 days.

Do you mean via the “Trial” version link in the Get App page? That’s the only place i see to go to access it, but it’s an older version.

It is the latest stable version. It will ask you to update to the latest cutting edge version.

How do i prevent this from happening in future (i’ve checked both update boxes) without having to update the version every 30 days (or maybe that’s the necessary best practice)?

The 30 day limit is only for the cutting edge version. And normally there is an update every few days. So this is only a problem if you take break of a month. You should active the automatic update notification.

ok, i was using the app (a version from December, so it wasn’t the cutting edge version) just a week ago. It was notifying me a new version was available (i had that active) but I didn’t want to download because the one i was using seemed stable. But then it locked me out of using it after only one week later.

so it wasn’t the cutting edge version

We use the word Cutting Edge for the betas. You have been using a beta from mid-December. If a beta is older than 30 days, it will force you to update to the latest beta or return to the stable version.

The dialog message is confusing for many users, and is on our list for improvement.

Thanks for the clarification @mekkablue and @GeorgSeifert. Sounds good, I understand better now.

Hopefully last question on this right now: I don’t recall seeing an option to return to the stable version if i don’t want to update then… is that an option when the update notification appears, or do I have to re download something?

If so, where do i go? (Normally I want the most cutting edge, but i have run into bugs that hindered me before when doing so, so stable is sometimes best.)

is that an option when the update notification appears, or do I have to re download something?

This is the link or redownload it from the Get App page.

Thanks for links… ok, that makes sense, will reference that for future if i want to stick with stable version for a while.