I’m not sure what’s happening. For a long time I’ve had a yellow warning sign next to my Python module in Glyphs. I just reinstalled the whole app, removed Python 3.10.7 from my Mac and launched glyphs with the two plugins I had installed for awhile, “Show Angled Handles” and “Show Stem Thickness.” No other plugins would work, it would come up with a Python error, like when trying to install Speedpunk. Under preferences, Glyphs still thinks I have a version of Python installed, still shows the warning symbol in the Python module install. What can I do here? We’re currently at having no plugins, scripts, or python versions installed locally.

Edit: While I had Python 3.10.6 installed I had the same problem. The only thing I can think of is that I have a new M1 Pro MacBook as of two months ago, which is when these problems started happening.

What Python version do you see in the Addons preferences? It should look something like “Version Number (Location)”, for example “3.9.1 (Glyphs)”:

The warning triangle in the modules section of the Plugin Manger is just a note to pay attention to, it does not indicate that there is something wrong with your installation and it never goes away.

3.10.7 should be OK. What error message do you get in the Macro Panel? 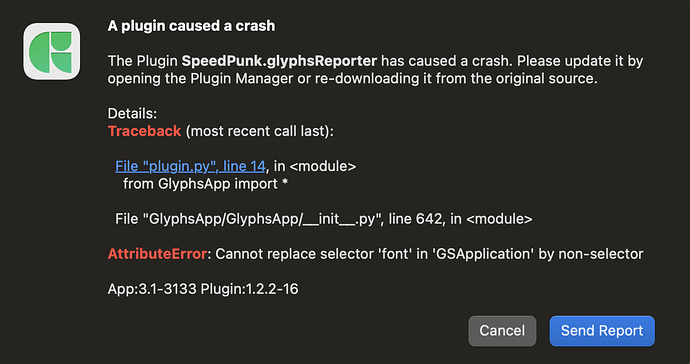 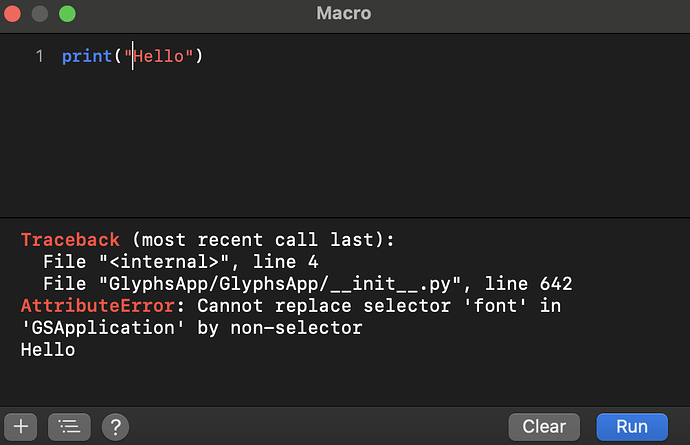 The first image is the Python error that I will always get when trying to install most plugins. I am unfamiliar with the Macro Panel, but I thought I’d try to get it to run a simple command. But it doesn’t seem to want to do it. The error is similar to the plugin error.

Install pyobjc by running the following on the command line and then relaunching Glyphs:

Alternatively, install the Python module from the Plugin Manager, relaunch Glyphs for the installation to complete, select the version ending in “(Glyphs)” in the Addons preferences and relaunch Glyphs again for the new version to be loaded.

It’s finally all working. I had pyobjc already, but this time the Python module actually worked somehow. Thank you very much for all the help!

The current pypbjc version is still buggy. So use this command to get an compatible version:

Made sure to run this as well, thank you for the compatible version!