Hello! As part of the design process, I often want to see changes in a glyph side-by-side with previous versions. Is there a straightforward way to accomplish this in the editor? I’ve been using an empty glyph slot to accomplish this but it feels janky. For example, if I’m working on a lowercase /a, I may copy/paste the glyph into, say, the empty /x slot, make my changes and evaluate. Is there a better way?

There are two pretty easy ways to do this: the “proper” way is probably duplicating the layer (by hitting the + button under Layers on the palette). With glyphs in a row you can select which layer you’re looking at for each on on that same palette panel.
It’s also very quick to hit Cmd-D with a glyph selected, which simultaneously creates a new glyph with an extension (e.g. /a.001) and puts it right next to your original.

There’s copying the paths to the background too (shortcut Cmd-J), but that only allows two variants to be compared.

I use a number of scripts from the Freemix collection. 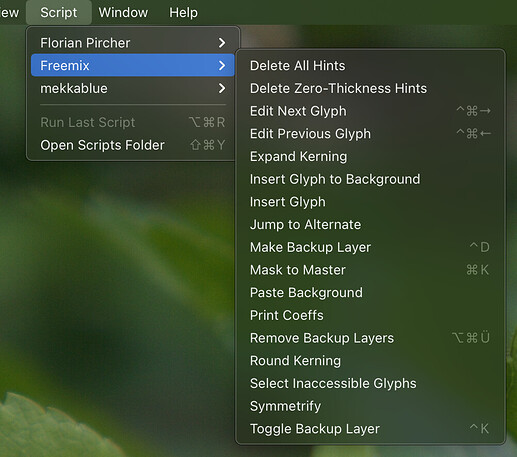 You can assign shortcuts to scripts in Glyphs → Preferences… → Shortcuts.