I think we may have discussed this before, but I can’t remember where.

If we don’t use a custom glyphOrder, the consonants get grouped by script. In the image here we can see Letter Thai, Letter Myanmar, Letter Khmer, Letter Lao — I don’t know what determines the order of scripts as Unicode would be Thai 0E00, Lao 0E80, Myanmar 1000, Khmer 1780. Note the marks all get bundled together (and this is only a fraction of the number of marks that a finished font will contain). 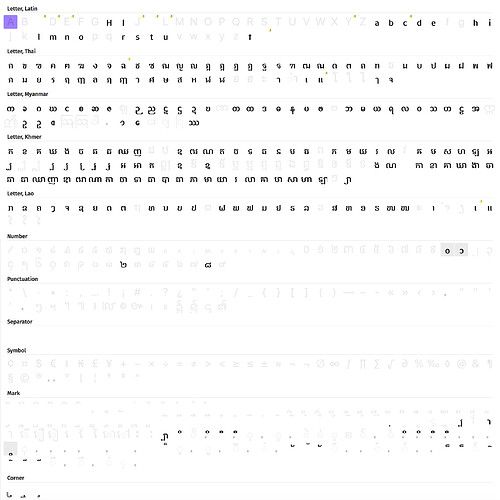 I really dislike the marks getting separated from the rest of the script, since it means scrolling quite a distance down, and then finding a particular Khmer or Burmese mark is really hard when they’re all jumbled together. Perhaps the default setup could have ‘Letter Thai’ followed by ‘Mark Thai’ then ‘Number Thai’ and ‘Punctuation Thai’ and the same for the other scripts?

Even when using a custom XML and explicitly setting the sortName so that they follow sequentially from the letters, the marks are still separated from the rest of their script.

So, the solution is to use a custom glyphOrder. Here’s a quick try: 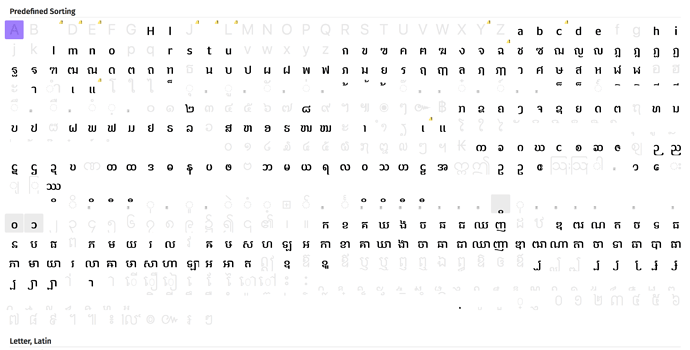 This is definitely better, but we’ve lost a way to group the scripts into different sections. When many of the glyphs are empty like this, it’s not too much of a problem but when things start filling up, finding a particular letter in all of them will start to take a bit of time. Of course we could try colour-coding to distinguish the Burmese from the Khmer, but I prefer to use colours for different purposes. Ideally I’d like to have better control of the glyph sequence. Would it be possible to implement a syntax in the glyphOrder to have separators with titles? For example:

It could potentially have hierarchy too, following the h1, h2, h3 idea for subcategories within a script (letters, marks, etc).

As a workaround, using the left sidebar script filter helped to get all marks along with the letters so far. But I think so too, that grouping them together by default would be pleasurable. 1+

Another side note: The sorting of the Thai glyphs is still kind of in shape groups rather than the alphabetical order or unicode order. @Bendy mentioned this a while ago, and it would be lovely to be addressed in the future

As a workaround, using the left sidebar script filter helped to get all marks along with the letters so far.

Yes, this is nice too. A bit cumbersome when you need to always click to change views when working on multiple scripts at once.

Also, wouldn’t it be nice if when clicking ‘Southeast Asia’ then all view wouldn’t just go empty? Could it should show all the glyphs belonging to those subcategories?

Having the Thai letters in shape order :’(

The sorting of the Thai glyphs is still kind of in shape groups rather than the alphabetical order or unicode order. @Bendy mentioned this a while ago, and it would be lovely to be addressed in the future

Why not just make your own using a Custom GlyphData.xml file and set up the sort order you desire? I have done that for my workflow and it makes things much more efficient for me.

Of course. The issue is that the default order is inconsistent with every other script, and makes the letters hard to find. You wouldn’t want Latin sorted in shape order: o, b, d, p, q, l, i, n, h, m, r. There’s no reason to design letters in that sequence; in fact I think it’s better to design different shaped letters first, so you can get a sense of how they gel together and whether the basic elements are working, before adding the letters that share shapes, which don’t so much help you think through the design. The only non-contentious order is to have it alphabetic.

Shape order is also misleading, and doesn’t help people learn the Thai alphabet: I’ve encountered people who think that the shape order presented here is actually alphabetic order for Thai, and who create specimens with the letters in this order.

I finally fold and revert the thai sorting order

And in a future version, there will be more control over groups and manual sorting.

Thanks Georg. I love it when you fold