Any help you can give would be great! Thank you for your help!

You need to understand the fundamental difference between characters and glyphs. A font is a set of glyphs, and some of them are connected to characters. Characters, on the other hand, are what you type. And an input method (like typing with a certain keyboard layout) produces characters and knows nothing about glyphs. Inside the font, you can set up rules for substituting glyphs. Holding down a key is something that the input method has to take care of.

The tutorial that Georg posted should explain the difference in depth.

Yeah that does. So is it possible to add custom selectable characters by holding shift then?

I do not understand the question. Shift is a modifier key. Holding shift and pressing a key usually gives you uppercase letters, depending on the selected keyboard layout.

Or do you have a particular app in mind?

For example I hold the letter A I see the options for “AB”, “AC”, etc…

Why not just type both letters? What you like to do needs to be implemented in the app where you type that can’t be done with a font.

The letters are embedded in each other. I know you can do this in font forge but I really like Glyphsapp.

I could see all the possible combinations for A or B

Again: Where? In which app? 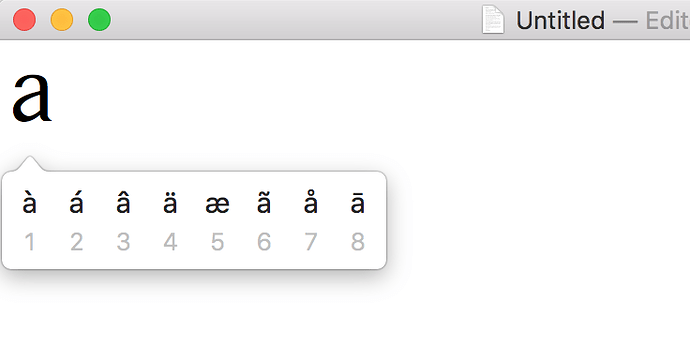 Seems like a ligature would do what you want: https://glyphsapp.com/tutorials/ligatures

A ligature would allow you to type the desired combination of letters, like “BB” and have it return a special B_B ligature glyph. That would be much easier than trying to select from a list of available alternates.

Thanks! I’ll give its a shot and report back!

Edit: I ran some tests and I think this will work perfectly!