Substitute a 'quotesingle' different on PC vs Mac

sub t quotesingle s by t_quotesingle_s;
the new substitution has everything smooth and connected together nicely for a script font.

Sounds like the PC app you’re using is doing “smart quote” substitutions before your OpenType code gets a chance to do its substitution.

Any way to communicate that to the PC users? I don’t have a PC, so I have no idea how to deal with that.

I ended up creating a script to substitute the ‘quoteright’ and that seems to be helping. I wonder if it’s just that PC tester.

Just to state I found this - so I’m having my PC tester check her Preferences. She was testing in Adobe Photoshop by the way: http://practicaltypography.com/straight-and-curly-quotes.html

Yes, maybe it makes sense to try to capture either situation with the OpenType coding:

okay I will try that. I’m ready to pull my hair out because it’s happening on my Mac in InDesign.

In newer Mac OSX the straight quote should also be replaced to quote right or left depending on the context, which happens before any OT feature is applied. In your code, you simply need to support both senarios but not ask the users to change their quotation setting, which is what Craig suggests. I’d add alternate quote right to the font & code to increase compatibility.

Okay so I have done this - I’ve added that both quoteright and quotesingle.

Now, when I go into Adobe Illustrator or InDesign to test my exported font (I’ve tried both OTF and TTF versions) it will not run the script for anything where I’m using an apostrophe sub glyph. It will with other characters (like a double r that I’ve set up). So if I type: it’s, didn’t, we’re - and I have glyphs set and scripts, it’s not working. What on earth could be happening? It tests fine within GlyphsApp, just not when used as a font.

If the new font appears to be not working, it is likely that you have a font cache problem.
http://www.glyphsapp.com/tutorials/eliminating-font-cache-problems

Even if all of my testers - some that are brand new are having problems showing the quote substitute?

Have you changed the family or instance name to avoid cache problem? Give it a totally different name and try it again. In the meantime, could you also post your code here (only the relevant section)?

Thanks for helping me troubleshoot this.

So, I did all the cache deleting, rebooting, renamed the font, installed and I got it to work FINE in both Adobe software programs and Mac Pages (which is a word processor). Everything - GREAT!

However, I found TWO new testers this morning. They have never installed it before and the fonts are not switching over to the scripts. Here is how they should look. I made sure kerning was zero on mine and theirs. Ignore the word, it’s - I forgot to kern that one in Glyphs. 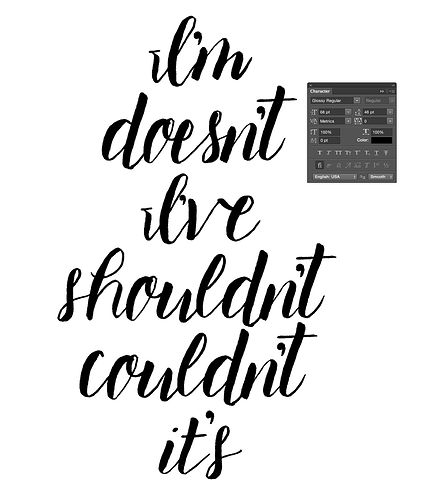 One person is on a PC and tried with Word and got this: 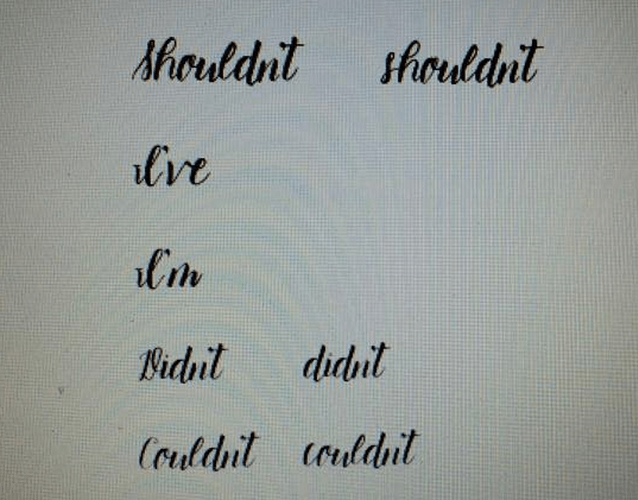 The other is on a MAC and typed in Photoshop and got this and her kerning is set to zero: 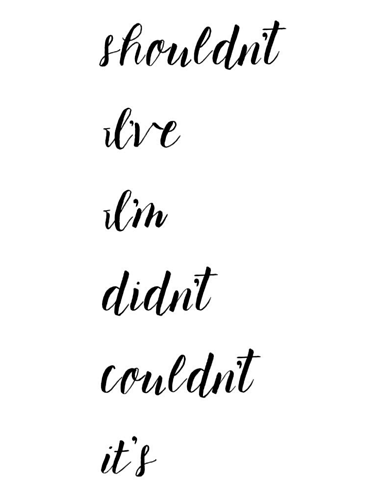 So for example, I have the apostrophe (quotesingle) t as an alternate sub for when you type doesn’t.
I have it named: quotesingle_t.liga (I added the .liga yesterday because I read it would help force it - it was doing this before I added it so it didn’t make a difference).

I added the quoteright as recommended.

I guess I can’t understand why I can get them to work fine as an exported font in all of my programs, but others cannot? I installed the OTF. My PC user used the TTF and my MAC user used the OTF.

In Photoshop, to use a font’s built in kerning you want to select “Metrics” from the kerning menu, NOT zero. Zero means ignore what the font says and make no sidebearing adjustments.
In Word, I think kerning may be turned off by default.

I meant tracking - tracking is 0 - yes, we all changed metric and optical with no different results for that.

Ligatures need to be activated too in order to work in Word.

The Mac Photoshop kerning problem looks like a user error to me. But it is hard to tell this way. Do not use Optical Kerning for script fonts. And if changing to Optical did not change the result, as you imply, I am pretty sure the text was not selected while changing the setting. Which counts as a user error.

THANKS! I think I’m getting some solutions with renaming the font file, too. You all have been really helpful!