I had a font set up with truncated names in Glyps 2, so it exported within the character limit, but in Glyphs 3 it is exporting with the full name instead. To confirm, the “localised family name” is the short version and “Typographic Name” the loner one that should only appear in font menus?

I copied across a “roughen” filter that is also not working in Glyphs 3.

In Glyphs 3 (no roughen effect on left, or on export):

A reboot and then opening the file again seems to activate the custom parameters — a workaround for now — but the export name is still the long version. Will look deeper to see if I’m doing anything wrong

Use the ‘Font Name’ parameter to control the exact name of exported font files. This allows you shorten both the family name and the style name. See the The PostScript Names section of the naming tutorial for hints on good short names. 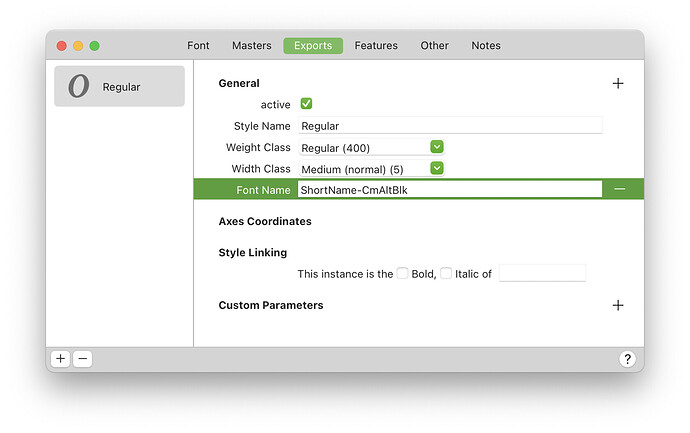 Thanks, Florian. Has this changed since Glyphs 2? It used to work as is, but this looks new.

Not sure about G2; I always used the ‘Font Name’ parameter when I wanted to control the file name since it gives me control over the entire name and not just the family part (the style name tends to be longer than the family name, no shortening just the family name would be of little use in most cases).

It also sets the OpenType name table value for ID 6. The name with ID 6 is mostly used as an internal name by software and not exposed to users. It should be unique across an entire operating system. (No two installed fonts should share the same ID 6 name entry.)

Aha. What’s happening is that MyFonts is flagging the name as too long, but not telling me WHICH name ID is too long. Any ideas what they may be referring to? There are so many different places where the name resides.

I have no experience with MyFonts, but I guess the family name “Korolev Compressed Alternates” is longer than most font families that I have seen.

Typically the family name is kept short while the style name is abbreviated, for example, the font name

I understand. My confusion is where specifically do I need to change the name? The file name? The “typographic name”? Some other place where the name is stored? I’ll try different things and see which they accept, as simply shortening the name of the file as you suggest did not work, it was still flagged. Must be seeing some internal name?

It might also be that they do not like the length of your display name. Maybe contacting them could resolve this.

By “display name” you mean the “typographic name”? (This is so confusing!)

Getting timely technical info out of MyFonts is nigh-on impossible.