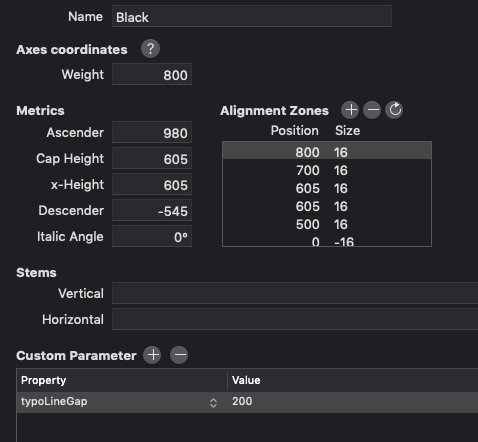 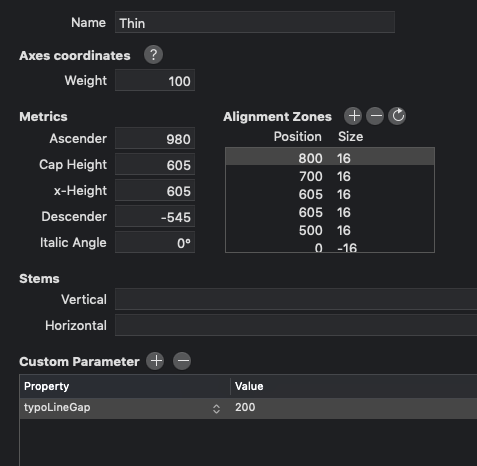 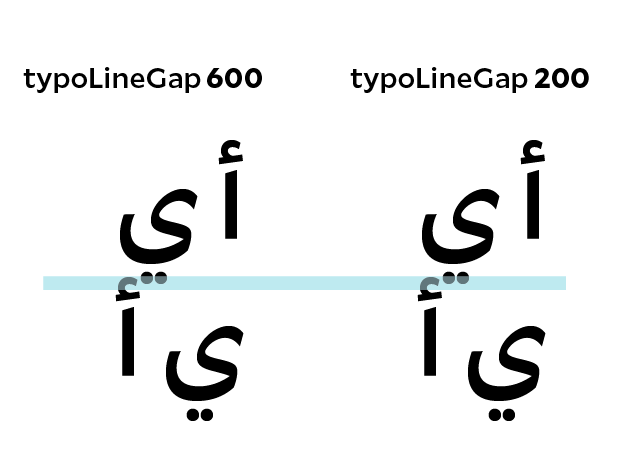 I have read somewhere in this forum that desktop publishing apps like indesign ignores the linegap value altogether. as it has it’s internal function of line spacing.
may be the same case for illustrator.

i don’t know if the values between the two apps are rendered exactly the same.

same thing on indesign, the best value for me is 17 pt

What you can try is make it fit the UPM. Easiest way is to increase the UPM value: Go to File > Font Info > Font and increase the Units per em value, e.g., from 1000 to 1400 or something like this.

But then again, in DTP apps, users are supposed to take care of line gaps themselves.

I’m still didn’t found any resolve for this issue, I hope to see typolinegap parameter work with me.

The line gap values have no influence on the line distances in DTP apps (e.g. Illustrator). Because the user sets the line gap in those apps.

The line gap values influence the positioning of lines in office apps (e.g. Text Edit) and in web browsers.

Thank you, The line gap values working with both DTP apps & office apps as well, but the Units per em value must be higher than 1000.

Changing the UPM has nothing to do with the line gap. It will just change the apparent size of the glyphs. A bigger UPM will make the glyphs look smaller.

Yes George, you are totally right, but with my different Arabic typefaces tests The line gap values working right if Units per em value higher than 1000.

Are you sure the line gap made the difference?

now I can told you that not