Unicode for emojis with multiple unicodes

I have a question regarding emojis that are set together with multiple unicodes. For example the

Astronaut emoji is set together with two unicodes (

You give them a name as you like (“astronaut” might be a good candidate) an then add this line to the ccmp feature.

the base emoji are not all in the glyphData, yet. So using the “uni” names are the easiest. But you can use proper names if you set the unicode/category/subCategory) manually or set up your own glyphdata: https://glyphsapp.com/tutorials/roll-your-own-glyph-data

Hi Georg, Thanks for your tipps. Just to be sure: Is it correct, that the “astronaut” glyph does not need it’s own unicode?
Is this the correct way to add the astronaut to glyphdata?:
<glyph unicode="u1F468 u200D u1F680" name="astronaut" category="Symbol" subCategory="Other" script="" description="" />

Hi Georg, Thanks for your tipps. Just to be sure: Is it correct, that the “astronaut” glyph does not need it’s own unicode?

Yes. It is a ‘ligature’ of the other three characters.

Remove the unicode and the empty attitudes.

Hi Georg. Regarding the empty unicode, won’t this lead to problems when exporting the font? Usually ligatures like “fi” also have their own unicode?
There is a small bug I can’t figure out how to solve. I added some emojis in ccpm feature as you mentioned, but I get this error message:
Fehler: »Glyph "u1F468" not in font.« im Feature ccpm in Zeile: 2
I checked in my font file and for example the glyph u1F468 does exist, but in the font file I can not add the “u” so the unicode for the glyph is only the number: “1F468”.
How can I solve this? 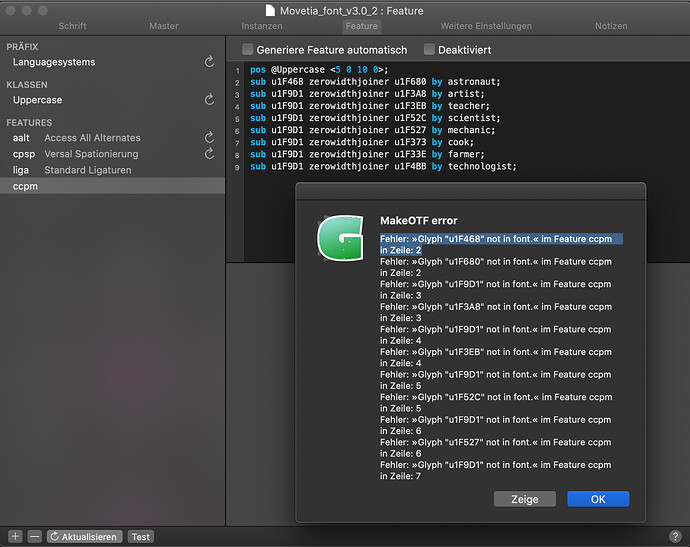 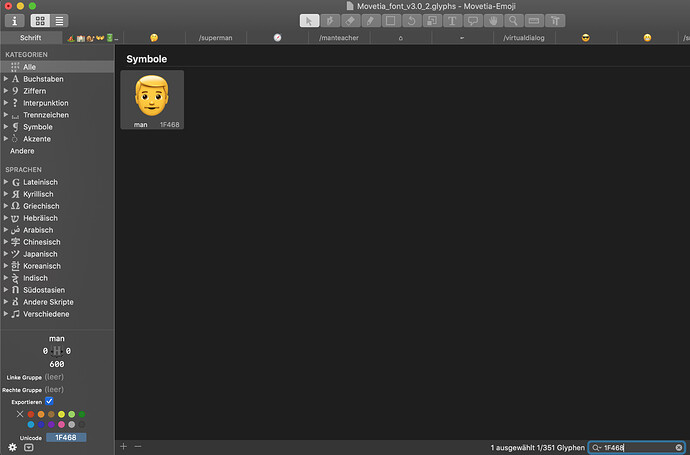 Regarding the empty unicode, won’t this lead to problems when exporting the font? Usually ligatures like “fi” also have their own unicode?

No. not usually. Those two are the only ones.

Hi Georg,
Great, everything worked now to export the font, but when using the font in indesign and adding the astronaut emoji it won‘t display the astronaut, but the two emojis (man + rocket) did I miss something? I programmed the ligatures in the ccpm feature.

In Indesign, you need to switch to the Global Composer. It seems that the “Adobe Composer” ignores substitutions with the zerowidthjoiner.