Hello with Islamic tradition assalamu alaikum
i am a software programmer and i have accepted a challenge to make nastaliq font.i have a glyphs of nastaliq. some tell me how to add in to font.i know glyphs app sport arabic but arabic in naskh. urdu and Farsi is in nastaliq which have more than one medial glyph.
some one help me
Thank (Wslam)

If you have more than one glyph per position, how do you decide which you need? Probably there is some context defining that? This page explains all aspects of the Adobe Feature file that is used by glyphs to compile the features: http://www.adobe.com/devnet/opentype/afdko/topic_feature_file_syntax.html

Hello with Islamic tradition assalamu alaikum
i know the positions of glyphs. in the given example is try to show the different form of beh and more over naskh is written in straight line but nastaliq is in slant line. how i change the glyphs with required form of beh
eg. when bea alif than bey form is that and when bay ray than bay form is that 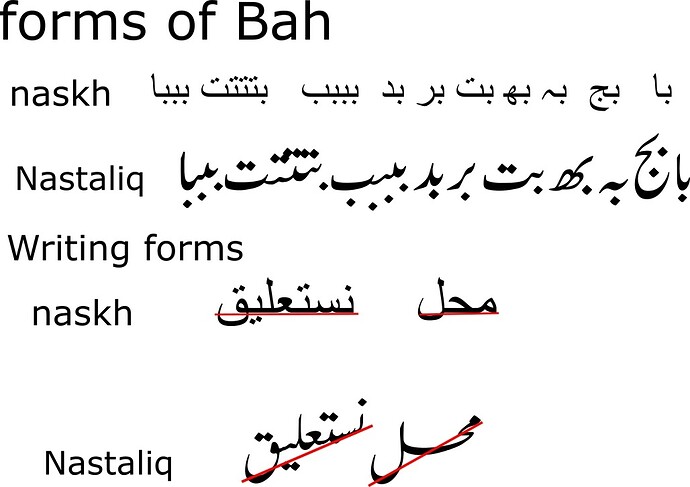 You need to place exit and entry anchors in your glyphs. There is an Arabic tutorial that explains this.

That would be a contextual substitution. There are tutorials about that too. Search for ‘contextual’ in the Tutorials section.

Which glyphs are you missing in the Arabic glyph list?

U+0750 to U+077F U+FB50 to U+FDFF The Urdu alphabet (Urdu: اردو تہجی‎, romanized: urdū tahajjī or اردو حروفِ تہجی‎, urdū harūf-e-tahajjī), is the right-to-left alphabet used for the Urdu language. It is a modification of the Persian alphabet, which is itself a derivative of the Arabic alphabet. The Urdu alphabet has up to 39 or 40 distinct letters with no distinct letter cases and is typically written in the calligraphic Nastaʿlīq script, whereas Arabic is more commonly written in the Naskh s...

This depends a lot on the style. You might need a lot alternate shapes or ligatures.

Is there a list of all the needed ligatures and glyphs

There are no “needed” ligatures. Just add whatever you think is needed for your design.

If you want a properly calligraphic Nasta’liq, you will need not just ligatures but alternative variants and styles of characters. For instance, with the ‘kashideh’ (stretched) versions of seen, sheen, be, pe, che etc. you’ll want versions 7, 9, 11 and 13 dots in length. Also shorter versions of alef, to stack under words.

The challenge with Nasta’liq (I write as both a calligrapher and type designer) is not so much the glyph combinations, which can be achieved with ligatures, but the stacking of joined glyphs (because words in properly written Nasta’liq don’t just descend at an angle from right to left but do so in a gentle curve), and above all the placement of nuqteh (dots). The beautiful Tasmeem Nasta’liqs (Farsi and Urdu versions) which DecoType created use proprietary technology to produce calligraphically correct typesetting. This also allows users to move characters and nuqteh independently of their context.