Hi, I’m trying to use the layer.connectAllOpenPaths() and nothing is actually happening, nor is there an error message in the Macro Panel.
Selecting by hand my paths and right clicking Close Open Paths in the context menu does work.

What am I missing?
Thanks!

Maybe you could use this:

But for me connectAllOpenPaths is also not doing anything.

That function is for connecting open path ends that are already on top of each other, like in this case:

Are both functions the same? -
Close Open Paths and layer.connectAllOpenPaths()?

No. One closes open paths, the other reconnects open path ends with identical coordinates.

Oh, in that case I have 2 questions:

The open pieces seem to be double and overlap the normal outline. Can you double click next the the curve and Cmd+Arrow right move the selection? I suspect that it is a full outline and some unneeded pieces will be left.

Also- is seems to work as one unit, shifting all together nicely.
just not actually closing. (nor is thisLayer.correctPathDirection() doing anything- thought that might help…)

Is there somewhere (couldn’t find) I can see how it’s done in OffsetCurve filter? Although the filter itself doesn’t answer what I need exactly, maybe it’s close? 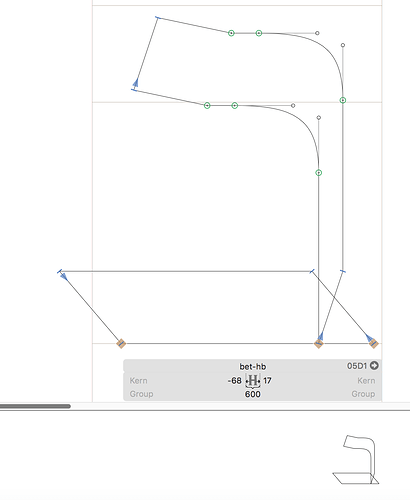 I think this might be due to adding a path manually and maybe doing it wrong?

Why are you doing this? Who does the path look before you do this?

The main objective is to create a version of BoradNibber for Hebrew glyphs.
In Hebrew the contrast is in an opposite direction to the one found in Latin glyphs, and BroadNibber can’t seem to handle that (tried originally to tweak the open code for that).
After some rounds of coding, I decided to try and code it myself (mainly- not using the OffsetCurve Filter, which seems to be the main problem for the flipped contrast).

It seems that the copying or the reversing of the paths was not done correctly. You see the strange direction of the end node indicators (the blue line and the arrow)?

Can you show the full code? Do you have it on GitHub already?

You can change the angle in Broadnibber.

You can change the angle in Broadnibber.

Yes, tried that as a starting point, and it still didn’t work properly- the output looked off in a Hebrew context.
Also tried to change the rotation matrix (worked better, not enough though)

Can you show the full code? Do you have it on GitHub already?

Not on git yet, but I can DM it to you shortly.

Can you post a screenshot of the layer before you run the script?

This is the original path: 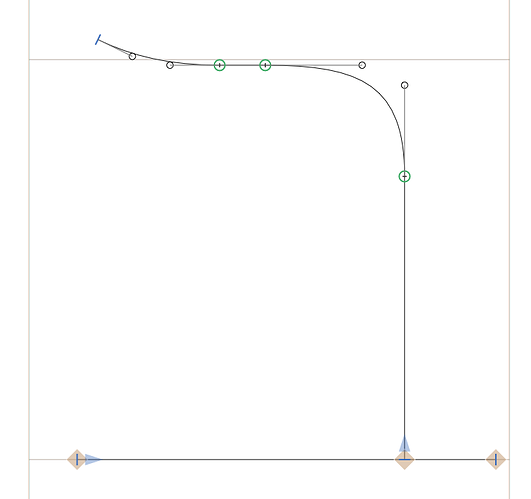 This is the outcome of running the script of copying the path, without creating the connecting paths the first and last nodes (just duplicated and shifted the original)

The funny arrows you noted only appear after creating the connecting paths (even without adding them to the layer paths yet, just declaring and initializing them)

I send you a “fixed” version of your script via DM. It is much simpler then you think

Oh my… that was simple…

I’m pasting here two notes that I think were helpful, for future searches on how to add nodes to a path

also - if a path is copied and you with to connect it to the original - it should be reversed - newPath.reverse()

Thank you so so much.