I cannot export a variable font with 2 axes after I introduced bracket layers to several glyphs. Currently I use v. 3.0.3 (3071). In fact, with cutting edge version 3068 I was able to export the variable font without the bracket layers successfully. But after I entered bracket layers, the export was getting slower as I was adding more brackets to additional glyphs. After a few entries, export was so slow that never ended. Then I switched to build 3071 but the variable export command did not even kick in. I use MacOs 11.2.3. Thanks 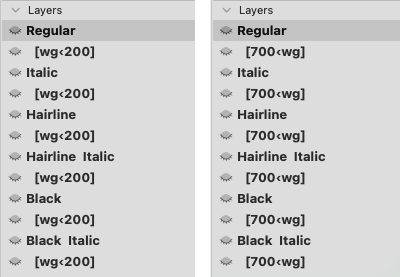 where do I send it to? just to make sure I don’t send it to the public (first timer…)

Please send it to support at this domain.

I sent the file a couple of weeks ago but did not get any feedback yet. I downloaded version 3075 but still export for variable fonts does not start (after pressing the next button nothing is activated) whereas the export command for otf and ufo works

I’ll have a look at it ASAP.

Sorry that it took so long.

There was an issue with many brace layers. I fixed it.

And you don’t need to add brace layers in “Ķ” any more, Glyphs will do that for you.

ok, is it an issue with the program or the file? Did you create an update?

You should be able to export the font in the latest cutting edge version.

Thanks, it works but when you export the variable font it doesn’t display the “Exporting fonts” process window which gives you the wrong impression that it doesn’t work.

I fixed the export dialog

One more thing, brace layers seem to function properly within Glyphs (e.g. a $ sign will change to its alternate version at a certain weight value) but it will not change in inDesign.
Any suggestions? Thanks

is there an update on this issue? Thanks

That should be fixed in the latests cutting edge version.

Same file? Will have another look.

The problem is with indesign. It ignores the feature that Glyphs is using for the feature variations. You can change the feature by a Feature for Feature Variations parameter in the font settings. Set it to “rlig” and it will work…