I have a 6 master Variable font with two axes (width and weight). The masters are at the Extremes so the Regular style (Normal width) is just an instance. If I don’t set the Variable Font Origin parameter the styles in Adobe menus look nicely sorted and everything seems to work, but FontBakery check gives me a FAIL:

If I add the parameter Variable Font Origin and set it to a master (e.g. Wide Regular) the Wide style in Adobe menus gets moved to the top of the style list (which is confusing for the user) and I get another FAIL from FontBakery:

So I guess adding the Regular instance as master would solve this to an extent. But it seems ridiculous to increase the size of the Variable font file by adding masters just for this. Is there another way to solve it?

This is just the temporary implementation of Adobe. Likely to change, again.

The naming of the variable font must reflect the default style.

If I decide to add the Regular instance as master in order to select it for the Variable Font Origin, is the interpolation going to be changed for other instances? Should I then also add two more masters for the Thin and Heavy on the Normal Width axis, or not? Here’s the setup: 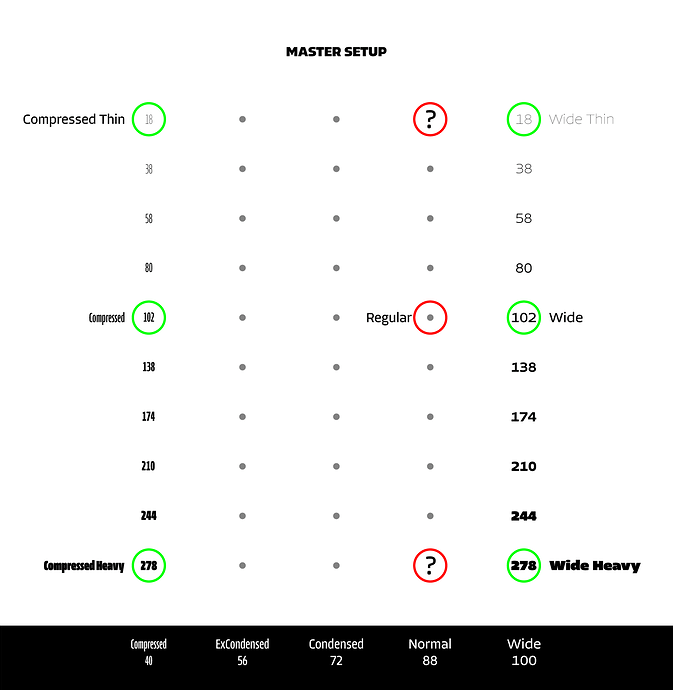 As far as I remember, even if you add a Regular master (and yes, most likely those two others too), you will get two Regulars in the same way. Adobe wants origin to be first, and the only way to get nice instance sorting is to set origin to the first instance’s master (which is probably what Glyphs did in your case), then it doesn’t duplicate. Regular origin probably makes sense in many places, but not for Adobe

Thanks for the reply! Menu sorting is my secondary concern. Even Adobe’s own Variable fonts have a style on top of the menu (only theirs is named Default – could be a good solution for Glyphs too). My main goal is to solve this FAIL I get from FontBakery:

And the only way I see that solved is by adding more masters. Which I really don’t want to do because it will increase the file size and is plain wrong. But it seems I’ll have to

Can you post a screenshot of your variable font setting? As well as your instance setup?

If you want your variable fonts primarily to work in and for Adobe apps, best heed their advice and just leave the default instance as the first instance (=first master). Or are you hell-bent on having Regular as your default instance?

Thanks for the reply! I get the perfect menu sorting in Adobe menus if I don’t set the Variable Font Origin. But then the font doesn’t pass the Adobe Fonts FontBakery check. You can see the FAIL message in the original post.

I wonder what their requirement is based on and whether it is something to worry about. Since it comes from Microsoft, I bet it has to do with MS Office support, which loves RIBBI.

The “requirement” is that the check-adobefonts gives no fails on the variable font. At least that’s what is requested.

I’m sure you can do some explaining and show that it works fine. Out of interest, could you show your instance metadata for your default instance? Maybe adding some extra name table parameters could help.

There are some of those test that require that the origin master is at weight 400 and be the same as the “Regular” instance. But that doesn’t make any sense as that means in a lot of cases to blow up the file size for no reason. And file size savings where one of the main selling points of variable fonts.

I don’t think any fontbakery check requires that there is a master at the axis default.

Many of the quoted fontbakery fails show that the messaging is kind of backwards. When it says

‘Compressed Thin’ instance has the same coordinates as the default instance; its subfamily name should be ‘Regular’

it would be more useful to describe it the other way round, i.e.

I’ve added a demo project that corresponds to your 2-axis setup and passes nearly all fontbakery checks. Fontbakery still complains that

Perhaps this was the reason:

I don’t even understand what that means exactly

AFAIK Word doesn’t use the STAT table entries to construct its font style menu, it relies on instances being defined in the fvar table for that.

I’d like to take a moment and clear up several misconceptions here.

In my opinion, things make more sense when you really think of a VF as a single font with all the instances “growing” from it – rather than looking at an axis-based spreadsheet. This single font is the origin of your designspace, it is where all the axes meet.

@GeorgSeifert: There are some of those test that require that the origin master is at weight 400 and be the same as the “Regular” instance

This is not accurate. There is absolutely no necessity to insert a Regular master into your designspace, just to appease FontBakery checks.

@jkutilek: I don’t think any fontbakery check requires that there is a master at the axis default.

I don’t think there needs to be a check for that, because a VF could simply not be built without having masters at the axis defaults. The combination of axis defaults again is at the position of that origin master

Thank you also for pointing at the backwards wording in the FontBakery test – this will be addressed – just as we’ve already already addressed the “no Bold instance” problem.

There is absolutely no necessity to insert a Regular master into your designspace, just to appease FontBakery checks.

This is great news! Thank you for taking the time to explain.

I worked on this yesterday and can now export a font that passes all Adobe tests. I’ll check if the other test show any relevant issues an then upload a new version later today.

THAT is great news. @GeorgSeifert you are the best!

Ok – now I see what you mean – so the current setup of the corners of the cube, could be theoretically shifted to ends of the axes (would require more fiddling with the points to get the extrapolations right) but one less master to worry about I suppose

I’ll keep that in mind in future projects! Thx Frank!