Vertical Metrics and My Fonts

Hi! I have encountered an odd issue whilst uploading my font on myfonts.com it says the following:

We’ve tested your fonts to ensure that when used on Windows, the acsenders and descenders will not appear clipped or cut off. It is good practice to ensure that your vertical metrics also accomodate your diacritics.

Followed what the tutorial provided by Glyphs and it didn’t work out. Same issue same errors.

I am new to Glyphs, I am going to attach my screenshots so you guys can see what’s going in my vertical metrics.

Thank you and happy holidays to all of you guys! 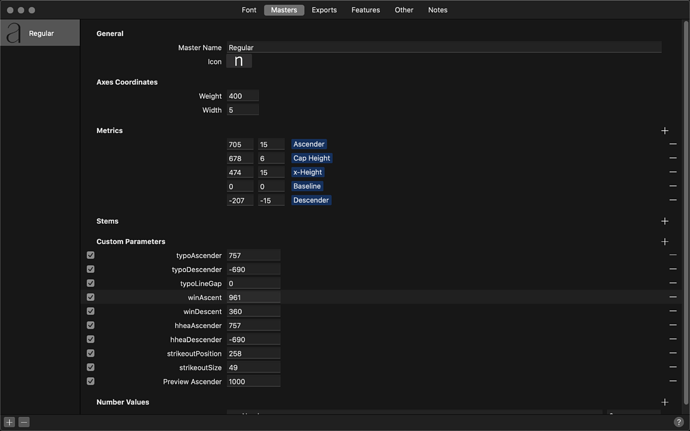 I suggest you follow the Webfont Strategy described in the tutorial. From what I see in your screenshots, you did not. Any reason why you chose not to?

In the Webfont Strategy, it is impossible that the win values are smaller than the hhea/typo values. Also make sure that the Use Typo Metrics parameter is set. And don’t forget the hheaLineGap.

I am new to Glyphs! Spent hours figuring out the Webfont Strategy. Thought I was following it correctly? Guess I was wrong. Thank you for clarifying things.

Reread the tutorial please, follow the steps exactly as described.

If there’s something unclear, let me know.