Hello all, I seldom use Glyphs so my knowledge base is extremely limited.

I am working on a custom font for a new branding project but I cannot get it to work as a webfont for some reason. The font has been made from a blank file and works properly for testing with the Adobe suite, but when it comes to exporting a WOFF/WOFF2 file, it never displays and just reverts back to the default system font for displaying.

I wasn’t sure if I was doing something incorrectly so I took an existing font and made a few modifications to test out the issue. The unmodified version of that font exports fine and works properly as a WOFF/WOFF2, but as soon as I export out the modified version and do the same, it reverts back to the default system font.

What am I missing here? Are there any extra steps that are required to properly export out a webfont?

I should also mention that when I test the font online (http://webfont-test.com/), it displays normally. It’s only when I try to actually host the font that it gets messed up.

Thanks for your time.

What am I missing here? Are there any extra steps that are required to properly export out a webfont?

Did you verify your HTML/CSS is correct? The fact that it works on the test page indicates that the font may be wrongly referenced.

I did and it’s still, unfortunately, not working. I tried uploading another webfont I had and simply just replaced the name in the code and that worked instantly. It’s extremely odd, especially that I can export out a WOFF file of an existing font and that works, but when I modify the same font it doesn’t.

Sure thing. It’s very much a work-in-progress but the file is attached. I’ve also attached the font I tried to modify as well from an existing font.
(removed – please do not post other people’s work without their permission —RES)

I opened the Sabali file in version 3.0.5 (3109), exported a WOFF, and ran the Webfont Test HTML script, and it displays as expected. The WOFF export is fine. 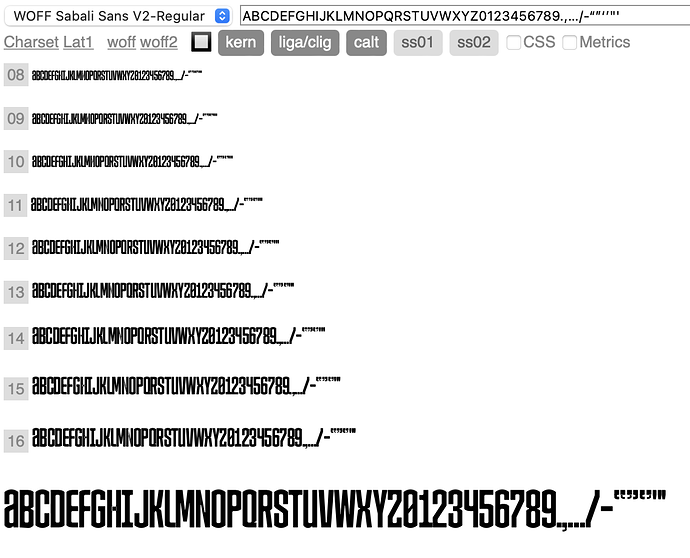 I am afraid the problem you describe probably lies within your HTML and CSS code, or with the access to the font file. Your browser console will help you find out.

I went through and tried a bunch of browsers and finally got it working on Safari. So clearly it’s not the font, but the HTML script seems okay too since it worked on Safari. My best guess is it’s a versioning/caching issue with Chrome and Firefox. Either way, thank you for your help. It’s greatly helped narrow down the issues. Appreciate it.