Why do some glyphs not combine

Is this standard behaviour or have i done something wrong?

When i type option u to get a pre-loaded dieresis, then type w, instead of getting a wdieresis i get two separate glyphs, this happens with some other characters too - like x, r, etc but works fine for a, e, u, i, o.

This might be a dumb question to some, but I am not an expert in languages so apologies if it is.

This is a problem of your input method, i.e., your current keyboard layout, which does not support these characters.

Edit: to clarify, your keyboard does not know wdieresis. Typing opt-U on your keyboard is a so-called dead key, which means that the key itself does not produce a character yet. It only does so in combination with a following key. And this is what counts now: your current keyboard layout only supports some combinations, like alt-U/a, alt-U/e, etc., but not all dieresis characters that Unicode knows. Try some of the newer keyboard layouts that ship with your Mac, like ABC Extended or any of the other extended layouts.

What separate glyphs do you get?

if wanting a dieresis i’d get a separate ¨ and w

OK so i take from this that I need not worry - as long as the glyph(s) are included in the font then they would work under the right conditions (i.e. on a computer configured for the correct language).

I tried to copy and paste dieresis from the web into my font and it shows fine then, just can’t combine using the option-U/w keyboard combo.

This is a limitation of the standard U.S. keyboard. Try U.S. Extended (on systems up to 10.11) or ABC Extended (on Sierra). It works there. Take a look at what else it can do with the Keyboard Viewer.

I just tried ABC Extended didn’t seem to change functionality in illustrator - unless i need to restart etc?

I just tried, and it works fine in Illustrator CC 2017: 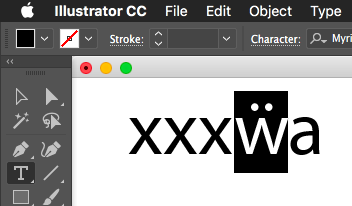 Make sure you do not have different keyboards in different apps. There is a setting in System Preferences for that.

Make sure you are typing the combining dieresis and not the spacing.

Right you are - i had forgotten to switch keyboards from the top right menu inside the app - works. Thanks.

Make sure you are typing the combining dieresis and not the spacing.

In this case, it is the precomposed wdieresis. So you would type the dieresis dead key (alt-U), followed by the base letter.

The nonspacing dieresis would require the base letter typed first, followed by the combining dieresis (alt-shift-U). But Illustrator does not support mark attachment, so this will not work.