In the “Transformation” palette, Glyphs provides helpful tools for aligning objects, but I wish it gave me more control over the process.

I think Inkscape does this really well. Here is their “Align and Distribute” panel: 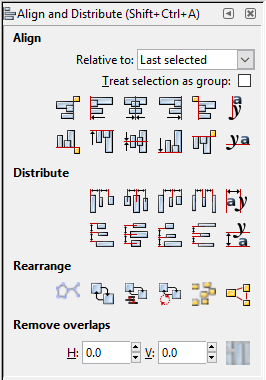 The option “relative to” is really helpful. It lets me choose “First selected”, “Last selected”, "Biggest object, “Smallest object”, “Page”, “Drawing” or “Selection”. It gives me easy control over which object to move and which to keep in place.

What Glyphs seems to do is to always align things to the bounding box of the selection (i.e. the union of selected objects). That is sometimes what you want, but not always. I most often have the case that I want to align a smaller object to a bigger one (keeping the bigger one in place), which I can’t do in Glyphs (or don’t know how).

This video shows how it works in Inkscape: https://www.youtube.com/watch?v=mDCQmYHlBEg

I most often have the case that I want to align a smaller object to a bigger one (keeping the bigger one in place), which I can’t do in Glyphs (or don’t know how).

Isn’t it just faster to push the small object “inside” of big one, then select both and hit “align”, than having to select them in a specific order and figure out which button is which?

I must admit the situations where I need distribution of objects is rare in my workflow. There is a distribution script for nodes in the mekkablue scripts.

Aligning: I use the buttons available in the palette. If one of the objects must not move at all, I copy and paste the center coordinate from one object to another in the grey info panel (Cmd-Shift-I).

But again, very rare in my workflow. Can I see the design for which you need it?

The use case for “distribute” is rare, I admit that. But I do have a couple of cases: 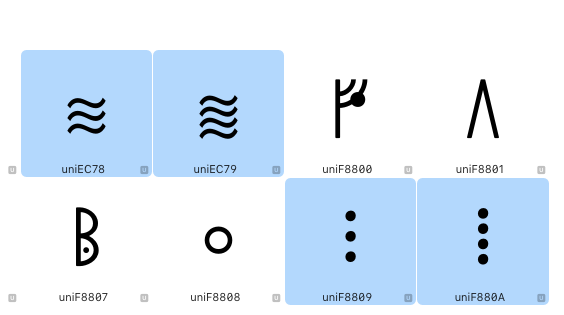 The first two highlighted above are custom made symbols that I need for a digital version of a certain dictionary from the 1970s. The latter two are “stacked” punctuation marks for the runic script. Some of these also have 5 and 6-piece versions. (None of these are Unicode signs).

For aligning, I understand that there are round-about ways of achieving the same thing.

The most common case I guess is that I want to center an anchor on a glyph (or a part of it). In that case I never want the character to move, only the anchor. Or align one anchor with another. In the latter case the “align” button will usually not do what I want, because if they are 20 pts apart it will move both of them by 10 pts so that they meet “in the middle”. But what I have in mind usually is “move this one so that it aligns with that one”, and there is no option for this in the GUI.

Anchors have a special alignment command. Select it and one or two nodes and press Cmd+Shift+A.

That would be a great opportunity to get into writing plugins