In Marshallese language we need these glyphs:

The Mm Oo with cedilla, and those with macrons above can easily be put into CCMP.

Unfortunately we run into a conflict with Ll Nn as they’re encoded as ‘$ with cedilla’ in Unicode but given the names ‘$commaaccent’ by Glyphs, since Latvian needs these characters to have the commaaccent instead of a cedilla. Since these Marshallese glyphs are physical cedillas, it feels wrong to call these alternates ‘$commaaccent.loclMAH’, but that seems to be what Glyphs would expect for auto feature generation, right?

Maybe these glyphs could also go into the sidebar as a subset of Latin?

[I’m not certain of the design of the M Nn cedilla, whether it’s fine centred but without the connection, or whether it’s better to use the standard cedilla and connect it into some stem or other. If there are any Marshallese users here please let me know!]

There was a discussion about the M+cedilla design on typeDrawers, recently.

And for now it will be $commaaccent.loclMAH

Thanks, yes, I saw that, but it seems we’re all guessing a bit about the preferred shape

‘for now’ means this might change in the future?

I might change that. Or not change it but add the automatic rule when there is Ncommaaccent and Ncedilla to add the substitution for Marshallese.

I came across a few visual representations of the Marshallese letters with cedilla:

• One of the most legit ones is a series of postage stamps dating from 1998 on a slab serif typeface with attached cedillas. You can visit the Marshallese-English Online Dictionary (MOD) and click on a stamp to access that particular letter. Then you can see it in a higher resolution.
Keep in mind, that the used web font Verdana is represented with dots bellow the letters instead of cedillas due to lack of these characters not just as a stylistic variation. 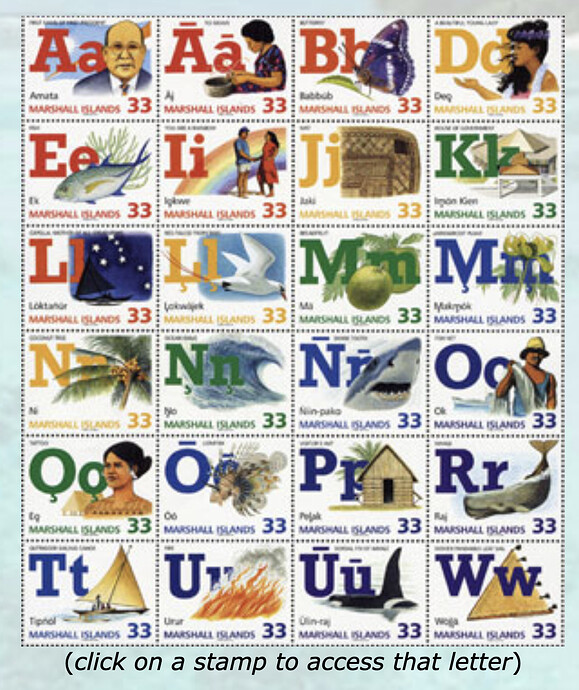 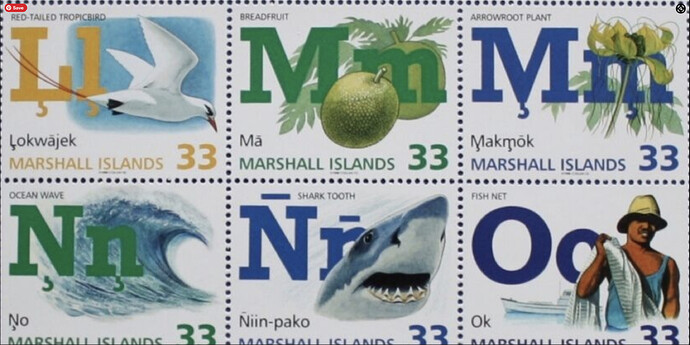 • Few other visual representations can be found on a TypeDrawer discussion on images provided by Frode Helland: 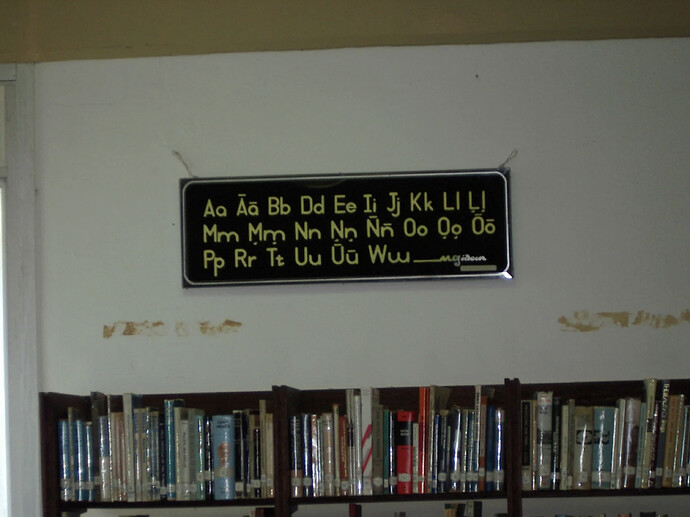 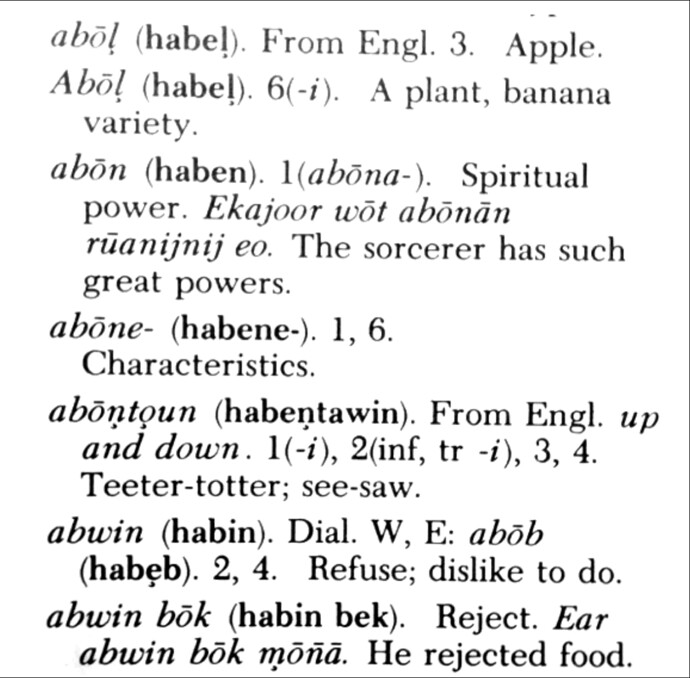 As far as I have seen one can use either attached or detached cedillas depending on the base letter design.

How one can test to type the Marshallese language? There is no keyboard on MacOS and I haven’t found any installable on the web too. So how one can type these letters in the first place?

And then, if one has created glyphs with suffix ‘$commaaccent.loclMAH’, then how could the end-user access them if there are not available language localizations in the Adobe CC (as one of the most mainstream softwares)?

Could you advise me what do you do?

I didn’t look into this in more detail. But it seems that you basically don’t need to do anything. All of those glyphs can be handled with mark positioning. The user would type ‘m’ + ‘cedillacomb’ and the mark feature will to the rest. I don’t see anything that is specific Marshallese. And if you need to adjust the shapes, add a precomposed glyph: ‘m_cedillacomb’.

Would that include also the characters with Unicode ĻŅļņ whose names should not be $commaaccent.loclMAH but only $_cedillacomb ?

For the glyphs with a Unicode, use the original name + loclMAH

Right, that’s how I set them.

However, so far I haven’t found an option to type on MacOS keyboard cedilla that is going to be combined with a letter. The marks that allow combination are grave, acute, dieresis, circumflex and tilde (marked with the yellow frame on the screenshot below). The other marks do not combine (the cedilla is available on the position of “z” with pressed Alt and Shift).

So, how one can type them in the first place? And second, how to set the language localization since there isn’t Marshallese (aka Majōl, or Ebon) in Adobe CC?

The only option is to find the proper cedilla from the glyph panel and apply it to a “n” but then it converts it to “n” with comma below. Perhaps, in that case, one can set a stylistic set but still, this is clumsy and cumbersome steps for the end-user.

On Windows, it is said to apply the numeric combos for cedilla but I will test them soon in practice.

Hi Nikolay, thanks for keeping me posted on this.

Many, many languages unfortunately don’t appear as options in InDesign etc. I’ve tried many times over the last decade to get Adobe to sort this out, by email, in their forum and in face-to-face meetings but there’s just a lot of inertia in such a big company. Even if dictionaries are not available for every language, text should still be able to have a language assigned. I’ve actually given up using InDesign for proofing fonts now, and we do everything in the browser. Languages are easy to set, per text element, and we can type Unicodes directly into the HTML using &#x0000; syntax. If you have to use InDesign, you’ll have to enter combining cedilla from the glyph palette if you don’t have a keyboard that contains it. Or you could make your own keyboard.

It is so sad that such giant software companies as Adobe do not upgrade their support for languages they are being asked for, as you mention. I hope this will change in the future.
I get your point that web browsers are more legit in terms of OpenType representation but so the users are being limited only to web usage.
My main question was how to facilitate the end-user to type their language with any keyboard.
I managed to make a workaround with the available default Latin keyboard in combinations of letters and legacy diacritics, such as cedilla. To do so I made the legacy cedilla with negative metrics (before export in the work file) and set it to be positioned under a preceeding letter. The tricky part is to align it under several-width-letters, such as M, m, n, l. But that could be done with contextual kerning groups, right?

You should be able to use mark positioning with the legacy marks. You might need to set the subcategory to “Nonspacing” (in font view, hit “Cmd+Option+i”). Then set the anchors as usual.

This is sounding more and more like a keyboarding issue and less like an Adobe issue or a font issue. How are users typing Marshallese in text editors or on their phones, if their keyboards don’t contain the letters they need?

Thank you for the suggestion, I’ll try it.

I guess the problem is complex and mostly due to market reason what I don’t take as enough argument not to support the language especially after you asked them so much.
And yes, it is also a keyboard issue.

Oh yes, there’s definitely a need for all app developers to allow all users to type their languages. For some companies it’s indeed a commercial decision based on the largest markets, for other companies it’s just not thinking beyond their own needs, or not understanding that different people may have different needs.

If users do have Marshallese keyboards already, the font and/or app shouldn’t need any special behaviour, and it should be easy enough to create a custom keyboard if they don’t.

Hello, I’ve been making some research on the Marshallese alphabet and several questions came to mind:

— The language is not accessible on InDesign… where is it accessible?
— Why the automatic .loclMAH feature does not include Mcedilla, Ocedilla, mcedilla and ocedilla?
— Why is it called Lcommaaccent.loclMAH when it’s made with a cedilla? It’s very confusing
— How to handle Nmacron and nmacron since they have no Unicode and the feature does not include them as well? By doing a calt feature?

Thanks for any feedback…!

(PS: I wish Unicode and Adobe could make those things more clear)