I was trying to create an svg-based font (transparent bitmap svg images as glyphs) but it doesn’t seem to work.
Either I’m missing something or there is a bug or creating such a font is not supported by Glyphs (yet?).
After setting up metrics on a master layer, placing an svg image on “svg” layer, exporting font, the way it displays in Photoshop/Illustration is weird. The glyphs width and height are no set properly.

Also, if trying to open an svg-based OTF file created in Fontself, I’m getting this error.

Surprisingly FontLab handles this file well enough to continue working with the font and exporting it properly.

Any idea if it’s going to work in Glyphs?

The last message in that thread says it was fixed. Looks like it wasn’t?
Sorry, I’m on the latest version

I don’t see a crash.
The file opens fine and contains a svg and a SBIX table. The metrics are a bit funny. The UPM is at 1000 but the ascender+decender are around half that. And the size of the SBIX table is quite a bit bigger then the actual images. 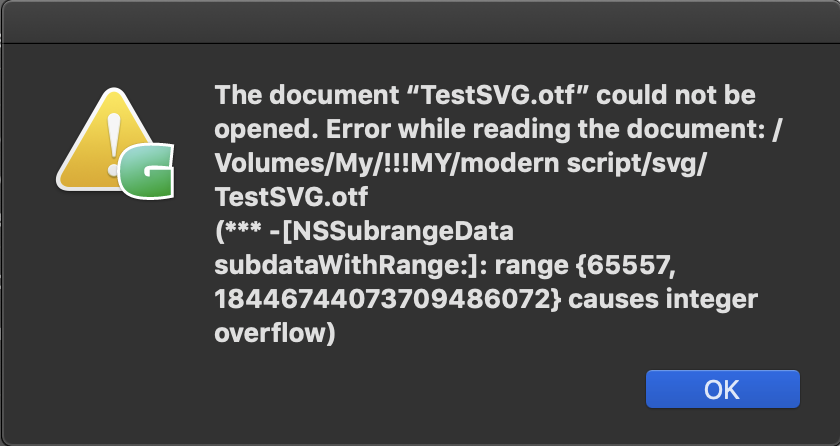 After the last update Glyphs does opens the Fontself otf. Two questions though:

The font from fontself contains both, a SVG and a sbix table.

The messed up positioning of the images could come from the way the svgs from fontself are written. You could try to remove the svg layer on some of the glyphs and add a SBIX to SVG custom parameter to see if that helps.

I’ll give it a try. Thank you, Georg!