Is there a tutorial for setting up the font family name for complex families (Multiple Master) in Glyphs 2? I’m working on a 9 weight family in 5 widths. I would like to set all of the styles under one main family name in the font menu, and have them categorized by width first (from compressed to extended) and by weight (Thin to Ultra). So that it would look something like this when you select the family in the font menu:

A tutorial is in the works. But this case is simple. There is just two things you need to take care of:

To make it work in Word, you may need to set Name IDs 21/22 for setting up RIBBI subfamilies of max. 4 fonts.

Follow these guidelines when you set up style linking:

Thanks for the quick reply! I’m really looking forward to seeing that tutorial.

OK, I thought Name IDs 21/22 were WWSFamilyName and WWSSubfamilyName? I understand the tutorial is not finished, but I would really appreciate a screenshot or two of the Glyphs 2 instances tab with an example family (with custom parameters set appropriately). I’m following your advice to shorten the names e.g. Compressed = Comp, so I was using prefferedSubfamilyName for that (as you suggested in the Multiple Master, Part 3 tutorial). But now I guess that won’t work?

Sorry, you’re right, I messed up. It is WWS Names, not preferred names. The official wording is Name IDs 1+2 and 21+22 are considered by Word, while Adobe apps prefer Name IDs 16+17.

So, the official best way to handle this is use Name IDs 1+2 (familyName and the style name), and use NameID 16+17 (preferred names) for Adobe menu sorting.

It gets kind of weird to repurpose Name ID 1 and 2 this way, so you can override it with the WWS names. It is a bit of a hack, because WWS names are only supposed to be used for any styles that go beyond the weight/width/slope naming model (which is not the case with your font family).

So, what I would try, in this order:

Only do that if you get the error described there. First test without shortening.

So if I get it right, every instance in my family needs to have these custom parameters set:
-familyName (to set the ID1 for Word)
-prefferedFamilyName (for Adobe apps)
-prefferedSubfamilyName (again for Adobe)

And the Style Name (ID2) should only contain Regular, Bold, Italic or Bold Italic?
Again, a screenshot of the “Example” family instance tab would be of great help.

That is one strategy to do it.

every instance in my family needs to have these custom parameters

But… what I would do in your case, is a different strategy, which I described as step 1 at the end of the previous post:

Just set up the instances without anything extra, export and test in Word and Adobe. Make sure weight+width classes as well as style linking are set properly (described above).

Chances are, everything may be just fine without any extra custom parameters for naming, ID1 always being the same, and ID2 the respective descriptive style name:

Do your testing in Word and Adobe apps. And if that does not work, move on to step 2 of my suggestion in the previous post. Run the script I mentioned. It sets Name IDs 21+22 to override IDs 1+2 for Word:

Again, a screenshot of the “Example” family instance tab would be of great help.

Which information are you hoping to get out of a screenshot?

I’m the visual type. Screenshot is the easiest way for me to confirm I got everything right.
I need to set the font naming for the worst case scenario. Yes, I know I can set it up the easy way now, and everything seems to work fine. But then a couple of years later a customer calls me (this actually happened) and says the MS Word files with my font don’t work when they switch platforms between Mac & PC in different versions of the app.

So basically, what I’m trying to find is the best way to set up the family naming to work without problems in MS Office apps across platforms and various versions. Sorry, now I realize I should have lead with that. I guess I just assumed that MS Office was the main reason anyone would make a font naming tutorial in the first place.

BTW, I did set up the instances without anything extra, exported, and tested. Everything works fine in Illustrator, and all the styles are visible in Word 2010 on a PC (except the Bold, which works via the B button as intended). Now I need to do some cross-platform testing.

Anyway, I am still really interested in finding out what is considered to be the best practice for large families font naming, taking into account the problems with MS applications.

Anyway, I am still really interested in finding out what is considered to be the best practice for large families font naming, taking into account the problems with MS applications.

What I described above is what I know about the subject. A little patience, and you find it all nicely written out in a tutorial.

Thank you so much for the help!

Hi there, anyone have experience with this issue: In some Office Word MAC app is shows Fat instead Bold, Normal instead Regular? I used custom parametr “WWSFamilyName: MyfamilyName Regular”, didnt help. Thanks for answering

Please read the Naming tutorial. This may just be how the Word menu works.

Ok I read a tutorial, but why Office Word shows Normal instead of Regular and Fat instead of Bold its still not clear for me.

Can you post a screenshot of the menu entries?

Do you think that it could be somehow linked with OS or Office app language setting? 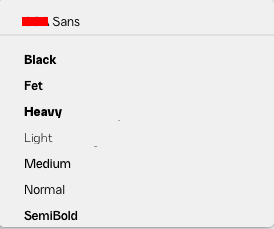 What is your system language? macOS renames some styles automatically in menus. You could try and add a localized style name, but I don’t know if that works.

Swedish, but translation Bold to Swedish is not Fat

I will try localized style name, thanks

In the screenshot you posted, I read Fet, not Fat.

Apple’s translations are generally not good. Book is literally translated to Buch in German, for instance, which is not the German term for a font weight.

A costumer just reported to us the exact same issue Displaay is describing. I tested the font family on Mac Ms Word and the the styles within the family are not displaying correctly (like shown above). also the style linking is all messed up. I checked the Glyph files and opened the OTFs and everything is correct. Also run some FDK reports and nothing comes up. Still the fonts have this problem in Word. I just exported the fonts again with the last version of Glyphs and the problem is gone. The thing is that I still can’t find the difference between the the new fonts and the faulty fonts. I know that the problem came from the Glyphs version that generated them, because I have a couple more families with the same problem (they were generated around the same time). Do you know what happened? What caused it? What is in a font that determines the Order of the fonts in family in the word menu?

Word has its own font cache, so be careful. Best to always test in a fresh user. Hard to exclude an interaction with a previous font version.