I have generated diacritics setts of glyphs in categories, etc., and would like Glyphs to combine them into composites but can’t find the way to do it. In FontLab, I used a text file that I generated showing the combinations I wanted. I also want to generate fractions. How do I do this?

This is one of the nicest things about Glyphs, it does most of the work for you. If you made the diacritis and base glyphs, Glyphs will automatically generate the composites. If you’already generated the composite glyphs and they are empty, go to Glyph > Make Component Glyph to regenerate. You can also have recipes when you go to Glyph > Add glyphs if you need something exotic. Most of the time it just works.

Generally, the tutorial section is a great resource and pretty extensive.
This video course by Charles Nix is excellent, much better than usual crap on Udemy etc. https://www.lynda.com/Glyphs-App-tutorials/Glyphs-App-Essential-Training/486041-2.html
He has some more on Glyphs, but this covers most stuff.
This YT series by Kevin King is also very, very good https://m.youtube.com/playlist?list=PLpZFgNF1dZymDlUoHd_wXfg7I11Vip1ZE
And the Handbook, despite having version 2.3 in the title is still relevant and actually helpful without being overblown.

I will give it a look again. Where do you enter the completed “recipe”?

Into the “Glyph” > “Generate Glyphs…” dialog.

got it! Tried it and got odd result, even after putting in anchors, the top figure jumps to the right instead of aligning on the anchors or even centered? See attached:

Can you send me a file that shows this?

Be happy to. I assume you mean the Glyphs file.

I sent it to you as a message, does that work?

I got the file.

In the “nut” change the anchor name to “center”, and in the numbers to “_center”.

Will try that, thanks!

Working with composite generation of glyphs with diacritics, all my composites come out at 600 units, no matter what the base glyph width was. Here is visual: 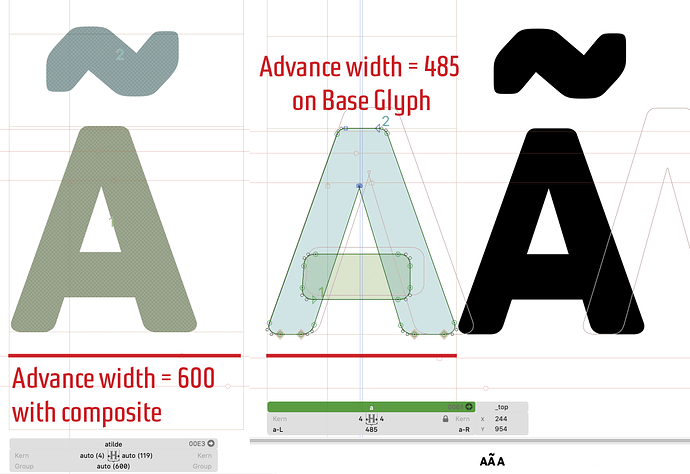 Do you have anchors in the A and the marks (press Cmd+u to get default ones).

Yes, I have manually placed anchors on all glyphs. They seem to be ignored.

I have made no settings other than on the base glyphs and component diacritics. EVERY composite I make ignores the right sidebearing of the base glyph and defaults to 600 units. I have made no changes to defaults, this is plain vanilla Gluphs 2.3. See attached:

Can you send me the .glyphs file? Best to support (at) (this website without www). I will have a look.

The letters need anchors without an underscore and the marks need one with underscore.
And I would suggest to put the “top” anchor in the lowercase at the x-height and in the uppercase at the cap height. That gives better consistency and control.