I keep running into this issue of "contains glyphs with duplicate production names: Tcommacent.smp, uni021A (unio021A.smp) . And if I go through and find the named glyphs and delete them then a more complicated long error message appears.

I’ve followed some of the advise on the forums and still no luck.

Any help would be greatly appreciated!

What the is longer error message? I suspect it to be about a glyph missing from opentype feature code. So you need to clean that up, too. 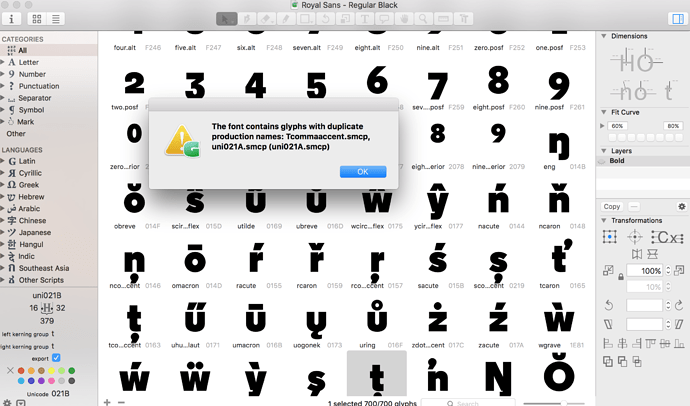 This the what the error message says. And how would I go about cleaning that up?

Thanks for your help

Delete or disable one of the two. These are two names for the same glyph.

Yeah I tried that earlier as well and I get this error message:

This means that you have too many substitutions. How many ligatures or alternates do you have in your font?

If you duplicate a glyph with a syntax like .ss01, the glyphName will be .ss01.001 by default. But the production name keeps the previous one, hence there’s always the message coming up:

It’s very annoying, since you end up renaming all those glyphs permanently. Especially in an early design phase where you have tons of design variants. I’d like to keep the default (and incrementing) .001 for many of those glyphs and don’t want to edit the production name manually. Cannot export the font if this issue isn’t resolved all the time.

Ahaaa. I can confirm that I duplicated in Edit View from time to time, indeed. Good call @composerjk

I believe Georg has already made the fix which will likely be in the upcoming 2.5.1 release.

I have 2.5.1 and can confirm that this issue is still rampant inside the font I am trying to export. Please advise?

Please update to the latest cutting edge version. Go to Glyphs > Preferences > Updates and activate both checkboxes, then Check for Updates.

Thanks, Meka. I updated. Same result.

Can you send us the .glyphs file? (a dropbox link as direct message on the forum).

Hello, I have just updated to 2.5.2 (1175) and I face the same issue with the same characters (The font contains glyphs with duplicate production names: tcommaaccent.smcp, uni021B.smcp (uni021B.smcp)). Already tried to delete the characters and remove them from all the features but then there was a “MakeOTF Error” of some kind. Checked for duplicate names and did not find.

I am only adding Cyrillic to the font, which otherwise is working perfectly. Help would be greatly appreciated! 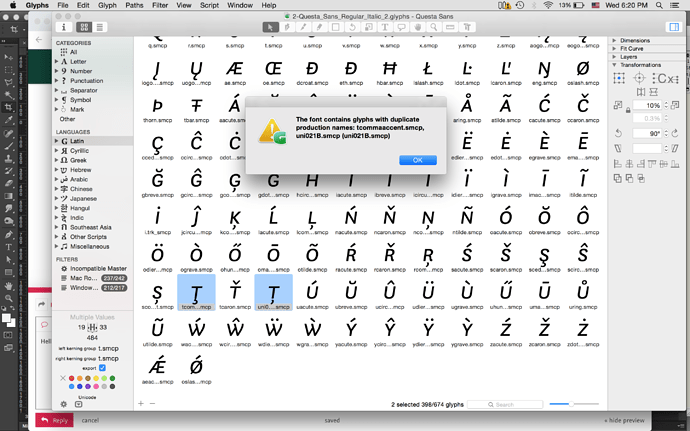 tcommaaccent.smcp will get uni021B.smcp as default production name. They are the same glyphs so you need to delete one of them. What makeOTF error do you get?

Hi Georg, thanks for stepping in. OK, I deleted the two glyphs, uni021B and uni021B.smcp. Then copied one by one the the content of the feature files ‘c2sc’ and ‘smcp’, pasted them in SublimeText, deleted all lines with those two glyphs and pasted the features back. Also deleted those from the ‘locl’ feature. Got the following error after hitting the Update button (the last three features appeared as well (sups, frac, ordn): 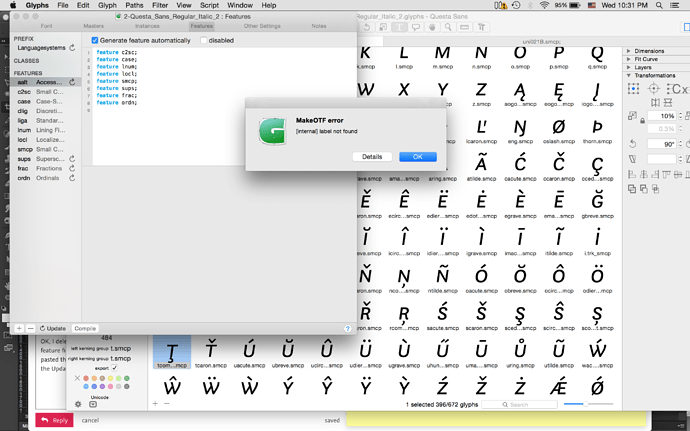 If I do not press the Update button and try to Export the font, I get the same error: 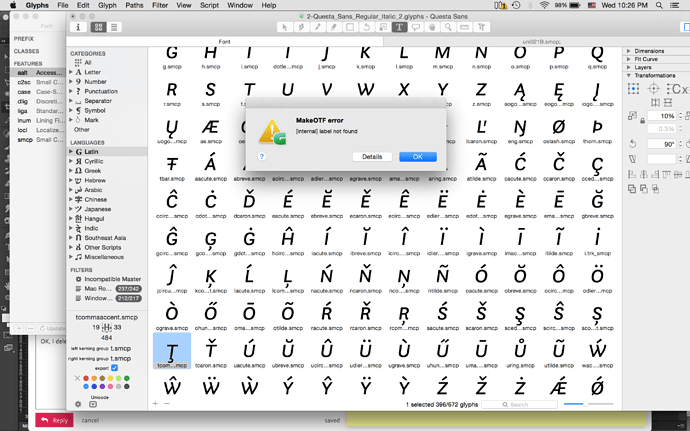 Can you try this: https://glyphsapp.com/tutorials/troubleshooting-a-font-that-does-not-export