How to automate Glyphs export?

Is there a headless version of Glyphsapp to export fonts with Glyphs using a shell script?

I just replied to Marc by email. There is no headless version (yet? The app depends on many resources like GlyphData and plugins. Loading all of them each time you call it, would be quite slow).

But you can control the normal app with AppleScript. I just had a look at it and improved a few minor things. I’ll post some sample code later. And it is possibel to run apple script from Python, too.

That means you need an apple server. It might be possibel to build a version that runs on Linux but that would mean a few weeks of work that I can’t spare at the moment.

Requiring the operating system to be OS X is no trouble.

The startup time issue is a valid concern, but in itself its just nice-to-have and is what the daemon model is for. The way Mac OS X works, running Glyphs on a desktop is running it as a daemon, which, as you say, can be controlled via the AppleScript API using a Python shell script. Would be great if you can post your AppleScript code in https://github.com/schriftgestalt/GlyphsSDK

My question is actually about running Glyphs ‘headless,’ on a Mac OS X machine without a GUI, such as Travis CI

When the operating system is GNU, then there’s a virtual X Window System server for machines without physical displays which can be used on Travis CI for rendering X GUIs, and xdotool to fake X mouse/keyboard input events.

But, I’m not aware of anything like that for Mac OS X, and, lacking such generic tooling, I wonder if there is or could be a ‘headless’ version.

Perhaps this could be similar to FontForge’s headless version - when you install FF on OS X with brew install fontforge then run fontforge you get the embedded Python interpreter’s >>> prompt with the fontforge module pre-loaded (no need to run import fontforge) so that you can do things like fontforge compile-my-project.py source-file.sfd that don’t involve a GUI.

In writing this I’m also reminded of how TextMate (https://github.com/textmate/textmate) has, since 2005, had a little shell utility tool to go with its GUI (http://blog.macromates.com/2005/textmate-shell-utility-tmmate/)

I seem to remember there was some “Glyphs Project File” stuff, and it seems natural to me that project files would have a headless program to operate them with.

If you run on macOS, you could just ignore the UI and tread the app as a headless daemon.

here is a sample script:

Here is a different example:

There are a few options to the generate command. They are mentioned in Glyphs Scripting Dictionary.

My knowledge of Applescript is flakey at best. I keep recieving Syntax Errors. 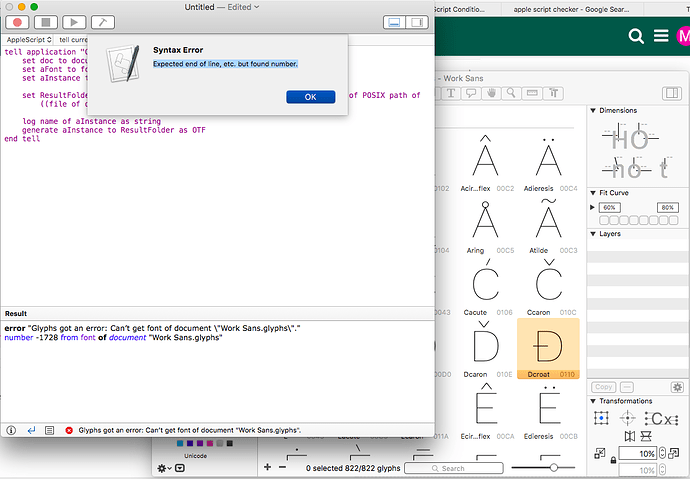 I’m running El Capitan and your scripts are being run through ‘Script Editor’.

I’m having some success with the first sample. I’ll get back to you if I run into further problems. Once again, thank you for this.

click on the square button in the lower left and then on Replies. Then run or compile the script again. But if it is not even compiling, then there is some typo somewhere.

@Marc_Foley what is the latest status of this?

I have no issues with generating an instance via an applescript but is there any documentation on generating a variable font with an appleScript?

Additionally, how would one run the scripts in the top bar (i.e. Script > Insert Instances, etc.) from an appleScript or is there a better way to do this?

I managed to cobble together a script that can do this through clicks using “system services”, but I have been unable to find a way to set an export destination

Just to get some context: Why are you doing it in AppleScript?

I am not tied to using AppleScript, in fact I would prefer not to use it at all. I wanted to automate the export process for a project I’m working on, so that if I make any edits to the source file I can run something like a build.sh to get my final .ttf

Ideally I wanted to make a build script to:

Then you should not use Apple Script. Have a look at the folder Glyphs remote scripts in the GlyphsSDK repo. The following script should get you started.

Great, thanks for this!

I will take a look at the repo

Basically I try to make it run writeVARTables:error: or _exportToURL:error (as written in the GlyphsApp python wrapper (the leading underscore there confuses me, I tried with and without when reforming to obj-c)).

You need to add a @interface defining the method. This would replace the header (that you don’t have) and tell the compiler what the object can do.

(the API seems to have changed since I posted the code)

if that is not working because it doesn’t know the GlyphsFileFormatVariationFonts class, use NSObject instead.

Oh, I was pretty close, I tried that before:

What does TTFPath take? The filename like @"afont.ttf"
and what/why does it need a GSInstance (I tried to just use the first one)?