LTR and RTL kerning gets mixed

Hi,
I encountered a kerning issue that results in this behaviour:
(pay attention to the distance between the period and the letters)
[Jumping Period in TextEdit]
(https://www.dropbox.com/s/8rilf13zsl8jjoj/period%20issue%20480p.mov?dl=0)
Jumping period in InDesign

Any ideas what’s causing the problem?

TextEdit: What is the correct position: before or after the jump?

The correct position is the more open and distanced from the letters.

In the first video it’s the BEFORE
In the second video (taken today) it’s the AFTER.

I think the editor is confused between RTL and LTR, since the period belongs to both. Can you send me the .glyphs file?

Yes, sent it. Thanks!

The problem is that there is also (negative) kerning for space-@period and @period-space that kicks in before the Hebrew kerning does, because the @period groups are used for both LTR and RTL. Perhaps you can establish a period.loclIWR with different kerning groups, e.g. @hebrewperiod left and right, and thus, separate the LTR and RTL kerning in that case.

Thanks, I will try that.

I did as you suggested and created a special period and comma for Hebrew.
First the automatic local feature didn’t seem to work, and after I wrote it myself and included the Latin script it works, but only for one side: 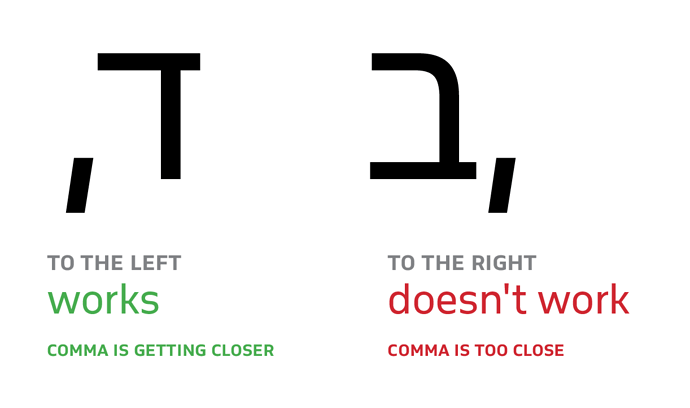 And here is the feature 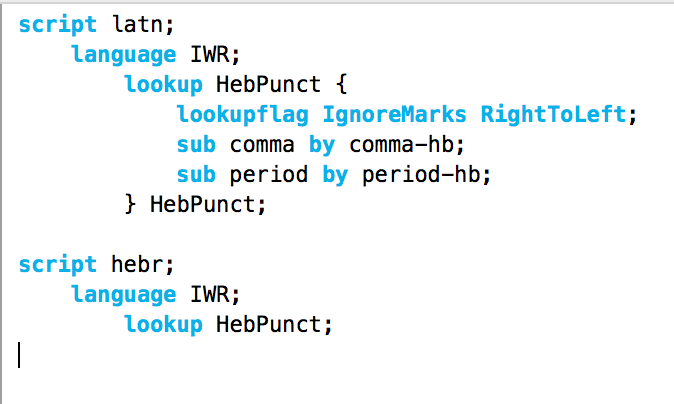 Any idea why this is happening?

I do not understand why you put IWR code under latn. Have you tried the name period.loclIWR as Suggested?

Of course, it was the first thing I tried, but it didn’t seem to work.

Could it possibly be related to this previous languagesystem issue I had?

I got there when I tried to play with the code. Suddenly when I changed the hebr to latn something moved.

did you fine-tune the kernings for -hb letterforms while Right-to-Left is pressed?