I have a feature suggestion. It would be great if there was an option to simulate the pointed nib calligraphic pen in combination with the offset path filter. Something like this: first you draw the contour as you would for a monoline font, then you set the pressure control points on the contour to get the thickness where you like. Each pressure point could have its own value. Here’s a sketch: 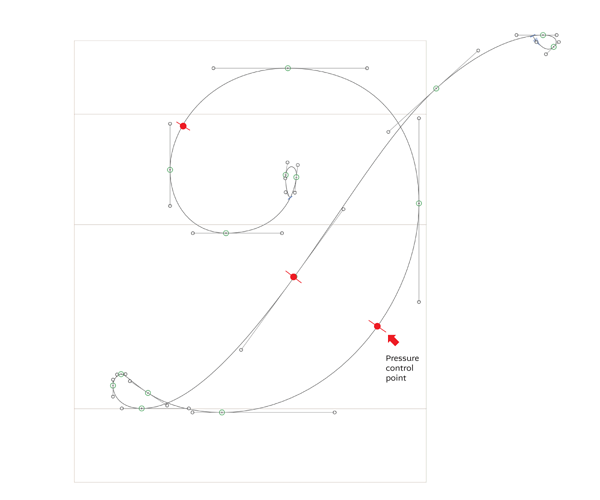 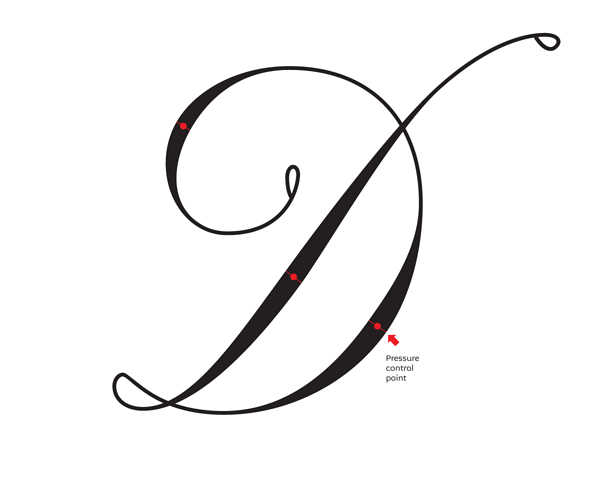 I second that request.

The Letterink plugin does exactly that. See the extend section.

@mekkablue – Are you sure about that? I tested the plugin months ago and it’s not what @knikola is asking for. What he is asking for is much more precise in that one would enter a value for each node throughout the outline where pressure was desired. I see a huge value in being able to do that when producing fine formal scripts.

@George_Thomas is completely right. I’ve just tested the Letterink app. Although it seems to be very useful as a broad nib simulator, it lacks the vital aspect for the pointed nib. There’s no way to set the nib to be a perfect circle, to get the monoline stroke. Also, no way to set the control point anywhere along the skeleton independent from the base nodes, which makes the skeleton too complex for an elegant workflow. I would have to add nodes in the middle of the curve, in addition to those on the extremes, which would make any changes to the design a nightmare. In this case it is much quicker working with the Offset Curve filter.

Three steps described by @George_Thomas is what we need!

What exactly do you do to the path? Just add nodes and pull them apart perpendicularly?

@mekkablue – A good question. I looked at the image above again and realized my three-step description is a bit off. It should read more like this:

When I’ve done fine scripts in the past, I did them just as you describe: pull apart the nodes where I needed more weight (pressure).

@mekkablue If you mean, after I apply the Offset Curve, then yes.

@George_Thomas it would be very useful if those pressure point nodes (your step 2) were not affecting the skeleton.

EDIT: For better clarity: pressure-point nodes should be independent from the regular (path defining) nodes.

@knikola – I changed it because after a second look at your image I thought I left something out. It can be done either way.

ETA: Now that I think of it, if one just didn’t enter a pressure value prior to Offset Curve it would not affect it so long as it could be done after-the-fact.

I think your 4 steps are explaining the requested feature in a correct way. Apart from not being able to simulate a round nib, the main problem with the Letterink app is being forced to define the skeleton in so many nodes. Usually, the right way to define a curve is to use the nodes on extremes. But in Letterink’s setup, you’re forced to add nodes in between, which makes the design hard to work with.

Also, @mekkablue is right. Perpendicular control nodes is what is needed.

I still don’t like the idea that nodes = pressure points. The highest pressure (widest stroke) is rarely on the extreme nodes.

That is true; the pressure-point nodes would have to be added. In my mind that’s the easiest way to define them because nodes are already a fixture of the skeleton or outline environment. A software engineer might have a better way.

I’m thinking about something like this for some time.

For now, simply omit the extreme points that you don’t need. I do that for italics all the time. And if you still think they should be in the final file, there is an export filter for that.

For now, simply omit the extreme points that you don’t need. I do that for italics all the time. And if you still think they should be in the final file, there is an export filter for that.

I don’t understand that statement. What does it have to do with the topic at hand?

Yeah, I didn’t get that either.

I still don’t like the idea that nodes = pressure points. The highest pressure (widest stroke) is rarely on the extreme nodes.

But technically there is not really a problem with adding the node there. Especially in script typefaces, extreme points do not necessarily make sense, so put the nodes where you need them rather than at extremes. That is also what Georg meant.

pressure-point nodes should be independent from the regular (path defining) nodes.

Not quite. From the images you posted, the resulting movement is confined by the surrounding (path defining) path points.

pull apart the nodes where I needed more weight (pressure)

No BCP correction? Onto both sides (left and right side of the path) equally? Exactly perpendicular to the tangent?

No BCP correction? Onto both sides (left and right side of the path) equally? Exactly perpendicular to the tangent?

Why the detailed questions about a simple answer I gave to a previous question? It appears to me it’s getting off-topic; we were just discussing a desired feature.

Oh, OK now I get what Georg wanted to say. I’m sorry but I have to disagree. I’ve spent years perfecting the technique of defining curves with nodes on the extremes. Of course I can draw a decent curve with nodes elsewhere, but any changes to such shapes are difficult to control, and I would end up wasting too much time. Especially when making a fine script – there are constant tiny changes to get the perfect shape. Nodes that are not on the extremes usually tend to make the shape bumpy.

Glyphs is perfect for my workflow as it is. The feature I’m asking for would just speed things up, without me having to change my technique.