Hello,
I’m trying to generate Small Caps from my font. I followed the online tutorial but when I duplicate glyphs, Unicode values got empty, so, when I export the font, Small Caps are not available.
Any clues ?
Thanks.

Small caps should not have unicodes. They are accessed by OpenType features. So you type the lowercase and apply the feature to access them.

If you call your small caps like this: “a.sc, b.sc …” you only need to open Font Info > Features and click the “Update” button. That will add the needed small cap feature.

Thanks,
I already did that, but Small Caps where not working on Indesign. I thought the empty Unicode values were the problem.
Any suggestion ?

So that means, in Font Info > Features, you clicked Update, and a feature called “smcp” appeared? If so, export the font and test again. Are you sure you’re using the current version of your export? How are you installing/testing the font?

Hi,
smcp appears on Features, but the Small Caps are still missing when exporting. I double checked and it’s the only version of the font. I’m testing it with Indesign, through RightFont.
Thanks.

What do you mean, the smallcaps are missing?

Can you test with the Adobe fonts folder? Testing your fonts in Adobe apps | Glyphs

Also, it’s possible that you’re not seeing the updated version (the first one installed through cache). I suggest you try exporting with a different name (just avoid the same family or instance names), or do the hard way which is to clear the font cache: Eliminating font cache problems | Glyphs

Hi,
On Indesign, when I select Small Caps option, texte on Lower Case doesn’t change.
Font is on Adobe Fonts folder.
Thanks

Thanks, I will try that.

So, I activated the font with Font Book and new it works on Word, but still not working on Indesign. Any ideas ?
Thanks

Are you sure the small caps in Word are the ones you designed? I would double-check.

Do the smallcaps appear when you open the glyphs window in InDesign? Are they listed there?

Thank you for your reply. Small Caps on Word are the ones I designed. On Indesign, Small Caps glyphs are on the glyphs window on InDesign, but text doesn’t chage when applying them.

How are you applying the smallcaps in InDesign?

Can you try the font in a tester auch as fontgauntlet.com? If it works there (turn on the feature smcp), then it’s an issue with your testing in InDesign.

Thanks,
smcp feature is there on fontgauntlet, but nothing happends to the text if I click it.

Can you post a screenshot of your feature code in Glyphs? 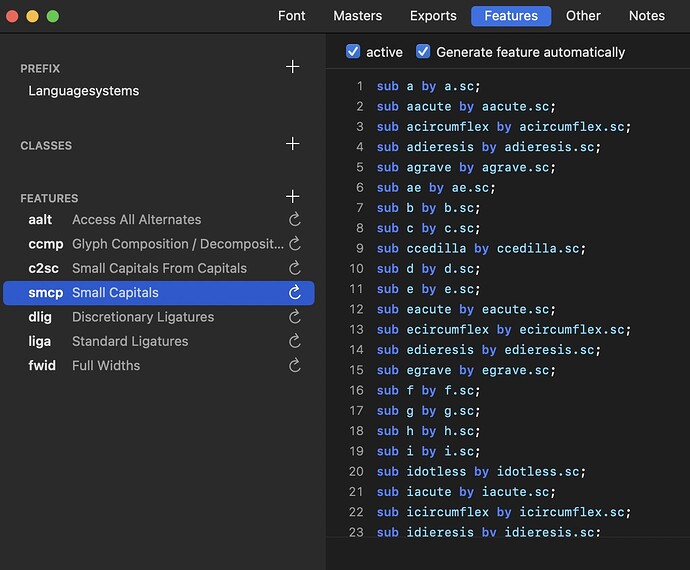 Would you mind sending me the .glyphs file? In a DM.

Well, this is new to me. I have absolutely no clue whatsoever why none of the features are working. Everything looks alright in the file in terms of feature code, the file exports fine (except for some autohint issues), the features show up, but nothing happens. Sadly I don’t have the time to investigate this more closely, I’ll have to leave this to Rainer or Georg

Thank you very much for your help.