When the automatic method to install vanilla do not work, install it manually.

It does not work for me.

I have implemented it as described:
I download Vanilla at GitHub. I open Glyphs > Skript > Skript Ordner öffnen
I copy the vanilla folder from the ZIP to …/Library/Application Support/Glyphs/Scripts/vanilla

Nothing happens, no message, nothing.

Can you check the setting in Preferences > User Settings > Use system console for script output? It should not be set.

It is not set.

Then there is something else wrong with your python. What happens if you run this in the macro window:

It’s the same, nothing happens. A dead window.

Maybe a new installation of Glyphs? If Python is missing, maybe it will be installed?

Can you send me a screenshot of the macro window.

I don’t think that python itself is broken. But you can try that in the terminal. Type python + enter in the command line. What do you get?

Hey Georg, mine is using the Vanilla in my /Library/Python/2.7/site-packages/ is that an issue?

No. I just found that installing it (correctly) into side packages doesn’t always work. So I decided to just put it into the Scripts folder as that seems to always work.

FYI, an alias of the Lib folder in the Scripts folder works just as well (so that way you can git clone vanilla into a folder and then just pull updates as necessary without another step to copy the Lib folder into Glyphs).

Thanks for the suggestion. But that adds one step to the list.

I have a new Mac, so I installed Glyphs once again. Unfortunately, I have exactly the same problems as on the previous Mac, with the little difference that has been on the old El Capitan, on the new High Sierra.

I have these folders:

I open the Macro Panel:

and get these message:

Because there’ s no message at all, I don’t know what happened. Is Vanilla installed or not? The folder is at the right place. I restart Glyphs after each step, so also now. So I try to install plugins. That doesn’t work either, no plugin, no nothing …

The error message is strange. You should get something like this:

What happens if you do:

Nothing happens after the input, the panel stays blank.

Nothing happens after the input, the panel stays blank.

There must at least be an error message: 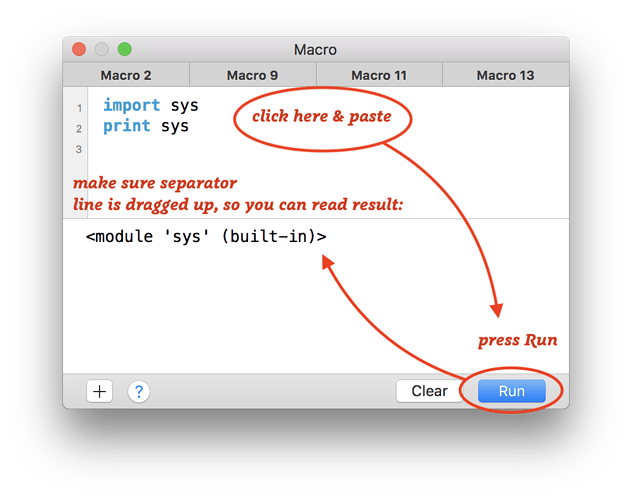 Should this work with Glyphs3 too? I copied the contents of the Lib folder into the Scripts folder but still get the error ModuleNotFoundError: No module named 'vanilla'

Maybe it’s the Lib folder, rather than its contents, that need to be in Scripts? Also when clicking ‘Open Scripts Folder’ it opens the Glyphs folder which contains Scripts, Plugins, Repositories and Temp. This just makes it ambiguous, where is this stuff meant to go?

EDIT: couldn’t find Vanilla in the Preferences > Addons manager in G3 like it has in G2

The modules are in the Plugin Manager, now.

I tried to update the Addons modules on Glyphs 2 from the preferences but after restarting the app (to validate them) Glyphs is crashing always and opens a traceback message that I’m attaching here as PDF:

It gives no option to open any macro panel, just crashes so I deleted them and put previous stable versions onto the Script folder.

Any idea how to upgrade safely? (Apart from Glyphs 3, which I’m using for other projects).

I thought that it’s necessary to upgrade these modules, as Rename Kerning Groups script by Toshi was not working recently.