I have 2 variable font glyphs files for upright (regular) and italic that have the same family name, style linking and 9 export instances for each face. I’ve read the naming, MM docs and forum posts related to naming with the VF italic face (but may have missed something). At issue is the italic face produces a ‘regular’ instance name that conflicts with the already installed ‘upright’ face for regular weight. Everything else seems to work okay. From what I can glean, it appears a solution for this may be in the 3.2 version, is that accurate? Or, is there something else I need to do for custom parameters and naming? I’m unable to purchase OTMaster at this time to manually make the changes to the name variables. I used FontTableViewer, for the italic VF font, to verify that name IDs 2 Mac Roman, 2 Win Unicode, 17 Win Unicode, etc show ‘regular’. I’m assuming I need them to be ‘italic’ for this to work, but may be wrong.

Do you have a “Variable Font Setting” in Font Info > Exports. Add one and give it a style name “Italic”.

I was unable to find anything like “Variable Font Setting” parameter in either General or Custom Parameters of Font Info>Exports. I attached screenshots of Custom Parameters. I’m at V 3.1.1 (3144). Does that parameter come with V3.2? 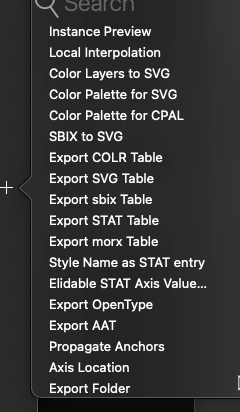 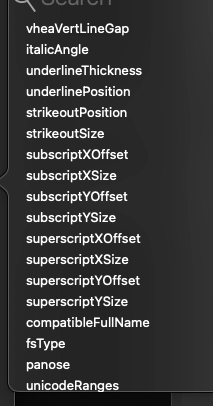 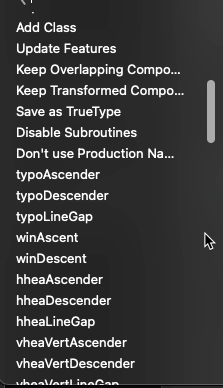 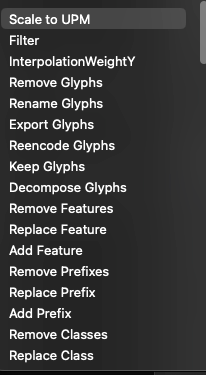 Variable Font Setting, is a variable instance, to add it, click on the + button. 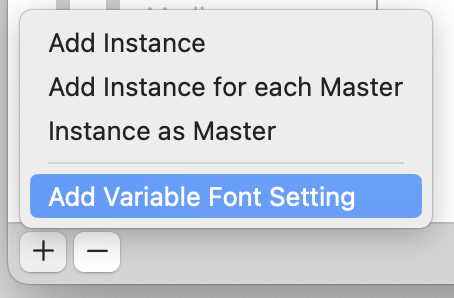 Thanks! I sometimes lack a natural grasp for the obvious. Now things like the ‘fileName’ parameter make more sense.
I have additional followup questions

I had similar problems naming my Variable Upright+Italic fonts. Take a look at this post you can see (screenshots) the way I set my Variable Font Setting – it works:

OK, seems to me we need a Variable section in the Naming Tutorial

. I’ve been gathering info on the forum on how to properly fill out the naming info for Variable Fonts so that everything fits nicely in Adobe menus, but to no success. I have a two axis (Width, Weight) variable font set in two files, one for upright styles the other for Italics. I’ve added the Variable Font Setting in the Font Info > Exports. Here’s a screenshot for both files: [Screen Shot 2022-11-01 at 11.03.03] [Scre…

In the end i just changed Name: Default to Name: Regular, for the regular style. If you have different names under fileName there should be no conflict in Font Book, maybe you need to clear your font cache.

Thanks for the feedback. I had previously read your post, and tried the post solutions (which went along with this thread feedback), with no success. There’s something I’m missing. Here are screenshots of the upright and italic settings. I set up a package for font cache clearing with shortcuts since I run it often. 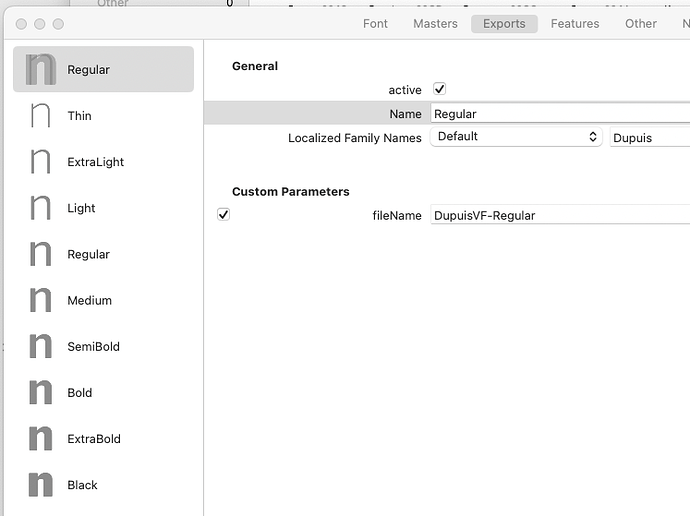 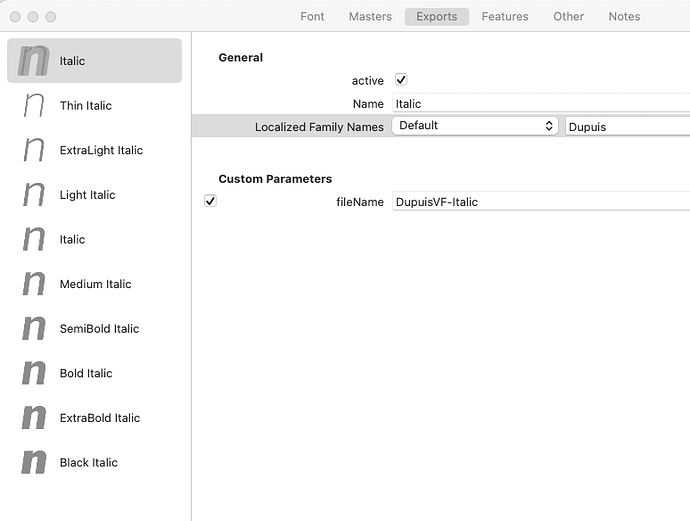 P.S. You did not post the Family Name field in your screenshot, I’m just assuming it’s Dupuis.

I previously tried a different Localized Family Name attribute with no change to the result.

When I then install italic I get this:

I choose ‘keep both’ and see this (the only oddity is Italic is listed twice, but that may be related to variable origin.) 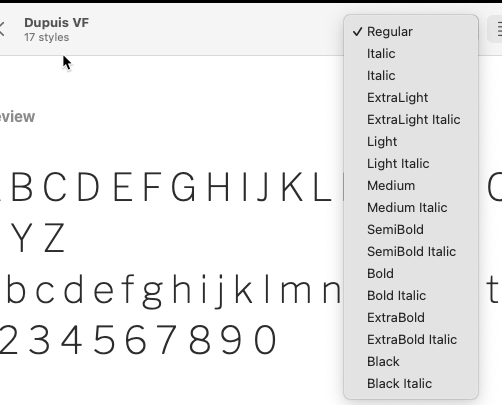 However, in Word I only see the upright style names, but they have the italic faces: 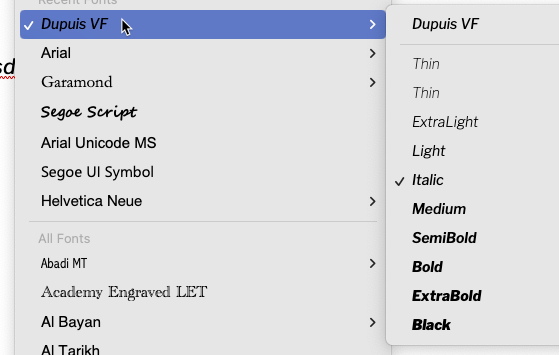 I had my clear font caches in a shell script that I executed from a package. I ran each command individually and found an OS error (don’t know yet if this is important. There used to be a fontprotection system some OSs ago, but it doesn’t seem to be applicable with Ventura):

I searched around and didn’t find any hits on errors with atsutil, maybe something has changed with Ventura perms. I then tried to use the Onyx ‘Fonts cache’ option. It ran with no errors, but there is no change to the Word/Pages behavior.
With Pages I see that only the Italic styles appear, but the names are correct. 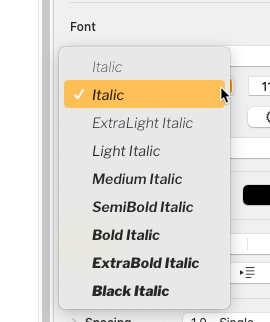 I’m thinking it has to be a naming issue. I’ve been through the naming, variable and masters docs (and forum posts) a number of times and haven’t found a solution yet. But, there are a number of exceptions stated that I don’t know if they apply to my situation.

Can you post the entire screenshot of the first tab in Font Info > Font?

Will try again. Had errors earlier with big .jpeg. 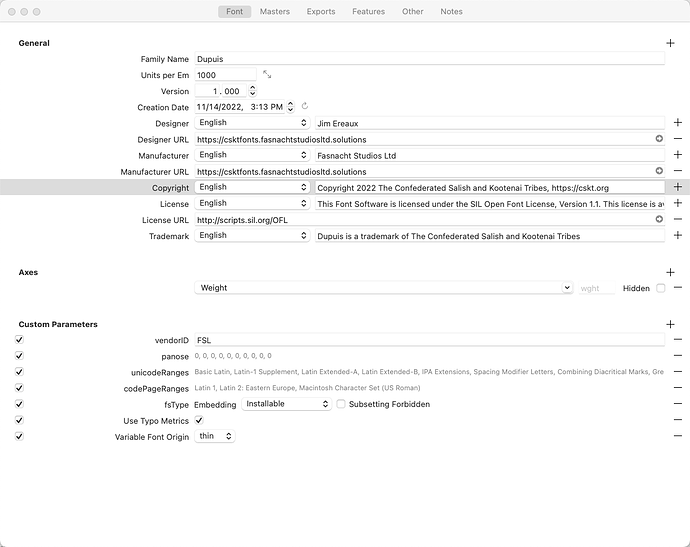 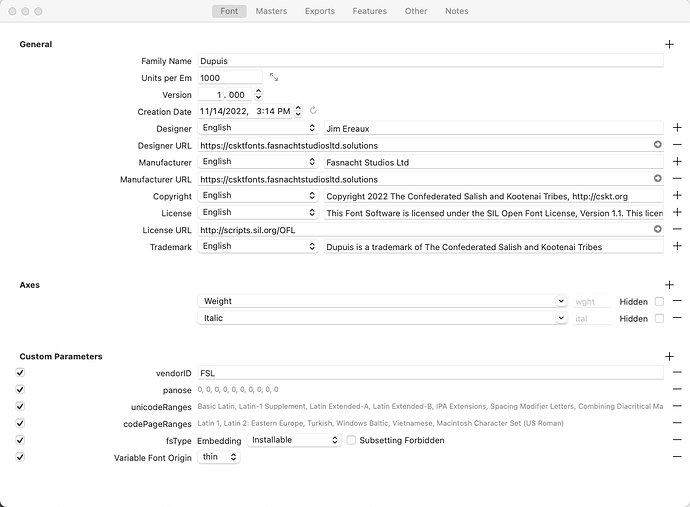 Or try to remove Variable Font Origin for now.

I renamed the variable font setting name to be the same as the VF origin (Thin for upright and Italic thin for Italic). The behaviors did not change. On Font Book install I still see the keep/skip/replace dialog. A keep both shows both upright/italic in the FB list, but Word/Pages only shows the Italic.

I removed the VF origin and reset the VF Name to Regular for upright and Italic for Italic. The behaviors did not change. On Font Book install I still see the keep/skip/replace dialog. A keep both shows both upright/italic in the FB list, but Word/Pages only shows the Italic (for Word it is the upright name with the Italic face).
My workflow is delete the family in Font Book, export the faces, use Onyx to clear the font cache, restart, install the latest family exports.

Do you have the same static font family also installed? If you do, try to remove it, see what happens.

Wait, why do you have the Ital axis in italic? That is the problem. Remove that and try again

I don’t have static versions installed, just this variable. I removed the italic axes with no change in behaviors. I also read, somewhere in a post, that I needed to use the font origin to prevent the Italic face from appearing twice in the style list. That is why it was enabled.

OK, looking at these screenshots I think you set the Variable Font Setting correctly. The problem still feels like a font cache problem, but if you cleared that and reset the computer it must be the naming. How did you name your instances, can you give us the screenshot? Especially the Italics.

Here are the instances for upright and regular: 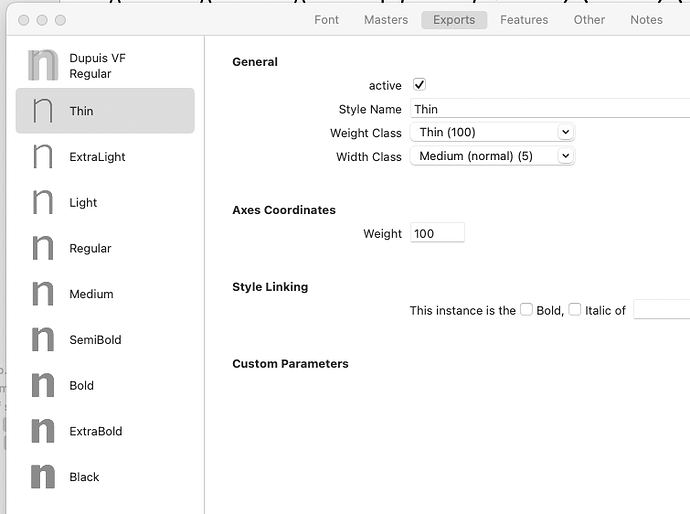 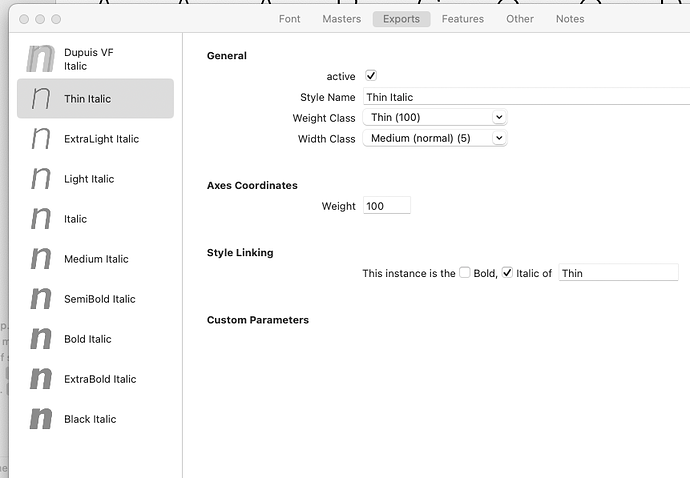 I also tried this script for cache cleaning:

When I ran it the summary restart dialog appeared, a but no error was shown. However, when I run atsutil from the command prompt I see this:

I also tried a safe boot several times with no change to behavior. The safe boot process on Apple Silicon is a little more involved than intel. I wondering if something has changed in Ventura for font cache cleaning?